I grew up in Bakersfield. While I'm not a full-fledged member of the Hell's Satans or anything, that city is a large part of who I am. My grandparents on my mother's side moved across the country to escape the Dust Bowl of Oklahoma and try to start over in California's orange groves and oil fields. Like many others, they did not receive their riches. They lived The Grapes of Wrath. It is from that harsh world that Bakersfield gave birth to a classic sound in country music.

The high production values and pop sensibilities of the "Nashville Sound" did not mean anything to many poor and working-class people in places like Bakersfield. Those songs sounded like escapism or fantasy to many. The sound of the fields, groves, and desert was something a bit more direct. The drums were loud, the arrangements sparse, and the vocals rough from the smoke in the Blackboard Cafe. 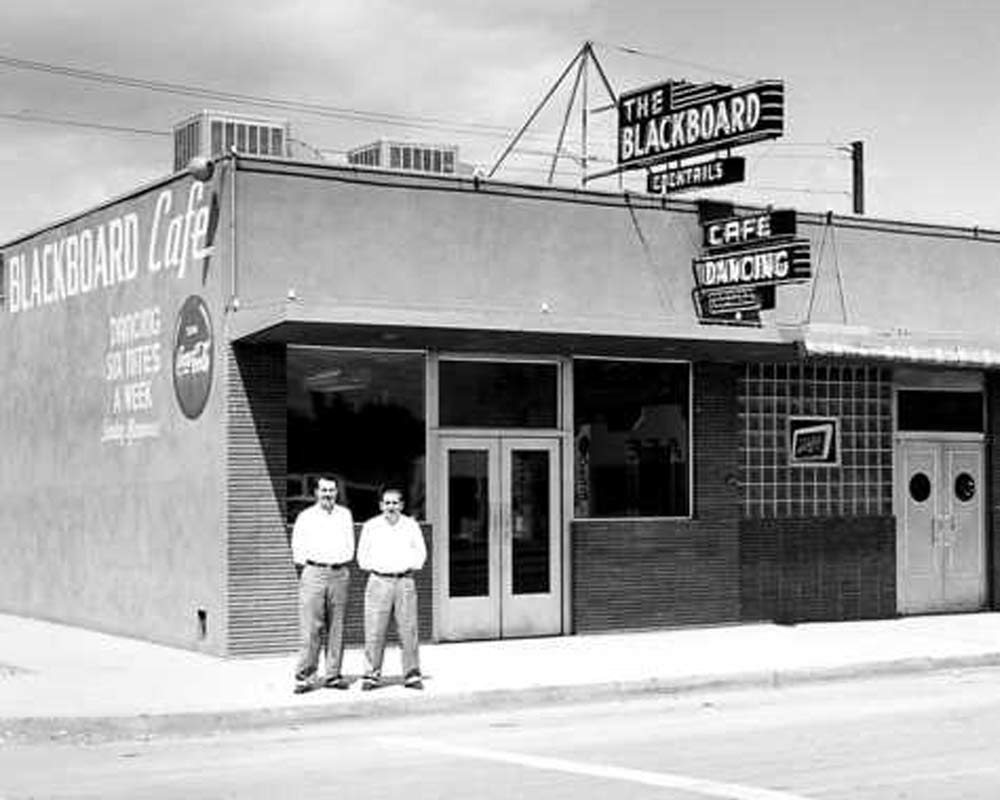 Bakersfield's Blackboard Cafe, a venue that catered to the city's hard country sound.

Harlan Howard is often credited with the phrase that country music is "three chords and the truth," and the Bakersfield sound was as honest and austere as it got. An entire scene rose up around this music. There were dances, TV shows such as The Cousin Herb Trading Post Show, many hits, and a lot of stories. People reacted to this energized music that spoke to working people. It was much like punk in that way.

Like a lot of Bakersfield teens in the '90s, I paid our town's musical history very little mind. Obviously, there was Buck and Merle, but country music seemed to be moving in a pop-oriented direction at the time and that didn't appeal to me and certainly didn't make me connect the dots between what I was hearing on the radio and the larger-than-life heroes of the Bakersfield Sound I'd heard about. At the time, Bakersfield music was an early version of Korn called Sex Art. It was going to punk shows at Jerry's Pizza. It was buying cassettes and CDs of garage bands at World Records. I came to appreciate the history later.

I was in Nashville on vacation in 2013. By then, I was under the spell of what we typically call Americana or Roots Music. To me, it's country. Anyway, I was standing there at the entryway of the rotating exhibit area and staring at a replica of the large, yellow Bakersfield Sign that used to span Union Avenue and now Sillect Avenue. I thought about how I had traveled 2,000 miles to only find my old home waiting for me. It'd always be there, no matter where I roamed.

The Bakersfield Sound is an important part of music history, and you can hear its influence all through the various subgenres of rock and country music today. Anytime a reverbed Telecaster, drums, and bass fire up like a Hemi, that's Bakersfield.

Also, if you're in Bako, check out Modern Wives and Western Medicine. They play Jerry's Pizza, Sandrini's, and other fine establishments around town.

Without a doubt, no name looms larger over the sun-beaten Bakersfield skyline than Mr. Buck Owens. In many ways, he built that town, and his spirit of entertainment and entrepreneurship still walks the streets of Bakersfield today. Buck Owens may not have invented the stripped-down and revved-up Bakersfield Sound, but he definitely helped perfect it—and brought it to the masses with a hurricane force.

Stories of Buck and his band, The Buckaroos, have become part of the local mythology. Some of these tales are great, some not so great. Some may be apocryphal. For example, it is known that The Buckaroos wore matching suits. It is said that when a band member left or was let go, Buck would keep the suit and hire the next good player that could fit into it, thus saving some money. Truth or Western tall-tale? Who knows, but a good story is a good story.

The tale behind the hit "Streets of Bakersfield" is a little more verifiable. Owens had hired a singer-songwriter named Homer Joy to record on a project, with part of Joy's compensation being to record some original tunes with The Buckaroos acting as a backing band. When the time came to record those songs, Joy was told the band needed to prepare for a tour. Joy, being a bit headstrong himself, just kept coming to the studio every morning, only to be turned away.

After walking around town for a while, he pulled from his less-than-pleasant experience and wrote one of the biggest country hits ever. He then played it for the studio manager. Long story short, Buck made some time for Homer that day. The man had an eye and ear for talent. Whether through his own songs, his legendary radio station KUZZ, or at his venue, The Crystal Palace, Buck always put the music front and center and always celebrated the town that sang along with him.

If Buck Owens is the name and face of the Bakersfield Sound, then Merle Haggard is the heart and spirit. Haggard was born and raised in an unincorporated area just immediately north of Bakersfield, called Oildale. Like many of his generation, Haggard's parents were Dust Bowl refugees who sought to change their luck in California's booming agricultural and oil industries. And like the thousands of others who came to Kern County for the same reasons, they found that life was still pretty rough in the Golden State.

As a child, Haggard lived in a converted boxcar with his family. At age eight, he lost his father. A rough life of poverty, lack of opportunity, and a desire for adventure soon led the young Haggard to trouble. He spent several stints in juvenile hall for his youthful indiscretions. Then, in 1957, he was sent to jail for attempted robbery. In true Bakersfield spirit, the man could not be kept down, and Merle did his absolute best to escape. Unfortunately, all this earned him was a transfer to San Quentin. While there, he was famously in the audience for Johnny Cash's San Quentin concert. Shortly after being released from prison, Haggard began his career in music.

While he may have traveled the world and become a country music legend, he always came back home. His music was as earnest as it was rebellious. Not everyone (including me) agreed with some of his rhetoric, but there was never any doubt where he stood, what he meant, and where he was coming from. The socially conservative views of Merle Haggard reflected those that are often found in the Bakersfield area, which has always been independent in views from its more liberal surroundings. Haggard himself later disavowed some of these views as time passed. I mean, how could hanging out with Willie Nelson not be an influence?

I highly recommend checking out the track "Kern River." It is a haunting song, as its name implies, about the deadly Kern River, which has swept 294 people to their deaths since 1968. When you grow up in Bakersfield, you grow up wary of that "mean piece of water."

While his own recordings only hit the charts eight times, Dallas Frazier wrote many songs that became timeless classics for others. "Alley Oop", "Elvira", "All I Have to Offer You (Is Me)," and "There Goes My Everything"—to name a few—were all written by Frazier. Dallas and his family moved to the Bakersfield area from Oklahoma during the Dust Bowl. Driven by the love of music, Frazier was a working musician at 12 years old, playing guitar with Ferlin Husky's band. He never looked back.

By the late '50s, Frazer was writing hits and touring the country. While he got an early start in the music industry, he brought the fields, orchards, struggle, and tumbleweeds of his childhood to his songs. While he eventually left the world of songwriting behind to join the clergy, his contributions to country music will never be forgotten.

Unsurprisingly, one of the architects of the Bakersfield Sound has ties to another "outlaw" Western desert town: Las Vegas. While Wynn Stewart got his start in California recording singles for Capitol Records, it was the time Stewart spent in Las Vegas, running the club Nashville Nevada, that helped him establish his career. Ownership of the club let him book up-and-coming acts and opened doors of opportunity for recording albums himself.

While most of his earlier Columbia singles didn't bring much fame or glory, his later recordings were highly regarded. Stewart served as a major inspiration for what would be the core of the Bakersfield Sound. One of Merle Haggard's earliest gigs was playing bass for Stewart's band in Vegas. While Stewart may not officially be a part of the Bako scene, it would not have existed as we know it without him. It was Stewart's records that got Owens, Haggard, and others to put pick to string.

In what should now be a familiar move, Shepard's family moved from back east to California in the early '40s. Settling in Visalia, a few hours north of Bakersfield, Jean began performing with her friends as the The Melody Ranch Girls. During a concert by Capitol recording artist Hank Thompson, Jean Shepard got up on stage and sang. Thompson was won over and worked to get Shepard signed.

At the time, there were not a lot of women working in "honky tonk" music, and the label wasn't confident that Shepard was going to be a hit. But her second single, "A Dear John Letter" (with Ferlin Husky) sold over a million copies. Not only was it one of the biggest hits for a female artist at the time, it was the first record from a Bakersfield artist to sell that many copies and is believed by many to be the actual first Bakersfield Sound record.

Shepard went on to record an album called Songs Of A Love Affair in 1956. From there, Shepard joined The Grand Ole Opry. Even though she went to Nashville, she stayed true to the roots of Bakersfield. As punk rock as anyone, she did not go in for Countrypolitan stylings. In a 2015 interview with The Tennessean, she gave her opinion of pop country: "Today's country is not country, and I'm very adamant about that… I'll tell anybody who'll listen, and some of those who don't want to listen, I'll tell them anyway. … Country music today isn't genuine."

Yeah, he's from not really from Bakersfield and comes in a bit later in the timeline, but we're going to claim him anyway. Almost no one who was a part of the first generation of the Sound was originally from there either. Bakersfield is less about geography than it is about attitude. I will say, though, that while I'm a fan of the Dwight Yoakam and The Bakersfield Beat show on SiriusXM, I'm not a fan of him using the Bakersfield name to sell biscuits. Oh well.

His cover of "Streets of Bakersfield," as well as hits such as "Guitars, Cadillacs," brought attention back to the Bakersfield Sound during the era of Garth Brooks and the rise of pop country. The heavy reverb, forward drums, and songs that can be played live without special effects or string sections resonated with those of us who liked a little grit in our tunes. Yoakam has embraced and celebrated the traditions of the Bakersfield Sound without allowing the style to become stagnant.

See More
Never Miss a Beat
Sign Up for the Reverb LP Newsletter
By clicking Subscribe, I agree to the processing of my data in order to receive emails.