You don’t have to be religious to follow the gospel of The Staple Singers. Tagged as “God’s greatest hitmakers,” the Staples’ discography is testament to the profound imprint they’ve left on gospel, soul, folk, and R&B. Started by father/guitarist Roebuck “Pops” Staples in the late 1940s, the singing family used their craft to advocate for social activism, equality, and self-empowerment. 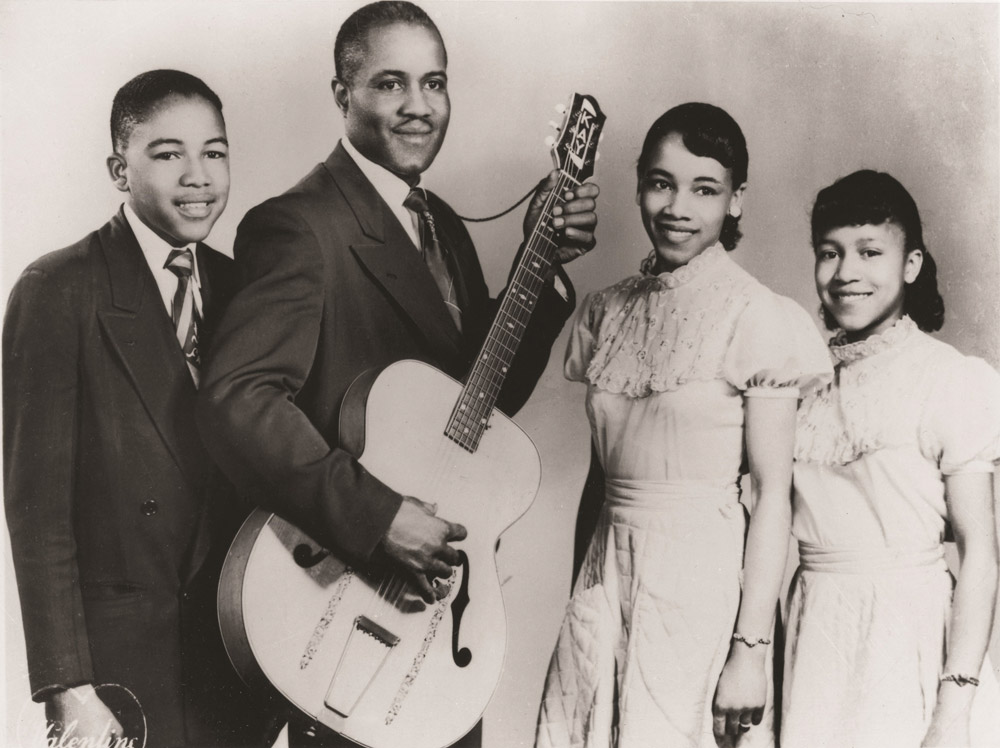 Influenced by guitarist Charley Patton and other seminal blues musicians, Pops started his career as a solo artist performing at community get-togethers in and around his home of Winona, Mississippi. In the 1930s, before relocating to Chicago to begin a family with his wife Oceola, he spent time singing with spiritual group the Golden Trumpets. Upon arriving in the city by the lake, he linked up with gospel sextet the Trumpet Jubilees. In 1948, frustrated with the groups lack of conviction, story has it that Pops grabbed his $7 pawn-shop guitar from the closet and boldly declared, “I’m going to sing with my children.” Alongside daughters Mavis, Yvonne, and Cleotha and his son, Pervis, the Staple Singers were born.

Spanning a half century and more than a dozen labels, the Staples’ sound was always one step ahead of the curve. Mavis’ arresting, high-spirited lead vocals combined with Pops’ warm, unforgettable blues-tremolo guitar put them at the forefront of both secular and religious markets, creating a rare space of peace, community, and togetherness throughout severe periods of unrest in America. Songs like “Reach Out, Touch a Hand, Make a Friend” and “Respect Yourself” remain equally poignant in 2018. Today we are lucky to have Mavis sustain the messages her family sang so adamantly about.

Below, we’ve put together a brief primer of standouts from their radical career. We’ve highlighted albums that showcase the group’s fortitude for anticipating and blending genres while remaining true to the virtues that cemented their family—but this is only a snapshot of their massive catalog. Never heard the Staples before? These six albums are great place to start.

Gospel and Spirituals, The Vee-Jay Years

Early Staples’ material consisted mainly of plantation spirituals, blues, and gospel. Another record for a local label ("Won’t You Sit Down,” on United) led to a contract with the Chicago-based Vee-Jay Records. The Staple Singers would remain at Vee-Jay from 1956 to 1963, a time period that included their breakthrough single, “Uncloudy Day.”
The Staple Singers - "Uncloudy Day"
The first Staple Singers LP. Sparse instrumentation—just Pops’ guitar, light drumming, and stunning, rural harmonies from the family. In an interview with AARP, Bob Dylan called this album the “most mysterious thing I’ve ever heard, it was was like the fog rolling in.” Mavis, only 16 when recorded, sounds remarkably powerful. It includes the standout 1956 hit “Uncloudy Day” and “I Had a Dream.”
It’s hard to find a better sounding gospel record. Pops’ playing is top notch, his love for the blues coming through strong. The vocal harmonies are near perfect and the group seem to have refined their sound and message. It includes the spiritual “Swing Low Sweet Chariot” and emotional standout “Going Away.”

Soul-Folk and Message Songs - The Stax and Epic Years

By the early ‘60s, the Staples were pivoting away from strict gospel music and beginning to add civil-rights oriented protest songs to their repertoire. Referring to the work of Dr. Martin Luther King Jr. during an interview for their 1999 Rock & Roll Hall of Fame induction, Mavis said, “If he can preach it, we can sing it.” Dr. King, whose favorite Staples song was “Why? (Am I Treated So Bad),” set the Staples on a path of righteous activism. With performances at Newport Folk Festival and Carnegie Hall, the Staples also gained the attention of a predominantly white folk-music audience. Staples-style, “soul-folk” arrangements of message songs like Dylan’s “Blowin In the Wind” and Buffalo Springfield's “For What It’s Worth” solidified the group as one of the most respected artists across the great divide.
The Staple Singers - "Build on That Shore" (Live)
Recorded live at Chicago’s New Nazareth Church, this 1965 album is one of the defining albums of the march towards civil rights. Re-issued in 2015 to commemorate the 50th anniversary of the civil rights march in Selma, the raw power of this performance is eternal. On “Build On That Shore” and civil rights anthem “We Shall Overcome,” Mavis holds nothing back, her voice taking on almost supernatural powers. Hearing the frenzied sounds of the congregation is a reminder that the Staples are here for the people. Despite its troubled lyrics, the title track remains of the most impassioned and uplifting in their catalog. There is nothing quite like hearing Pops and his kids singing “Marching up freedom highway / marching each and every day” together.
Soul Folk In Action was their first LP for Stax records and featured a notable shift in their sound. Where previous releases utilized the go-to formula of family group vocals supported by Pops’ electric guitar, Soul Folk in Action took on a full band arrangement backed by Booker T & The MG’s. The secular songs chosen for this record all had socio-political messages, with the Staples transforming them into something of their own. Does it get any better than the Staples doing “The Weight”? At the time of the album’s release, Stax simultaneously signed Mavis as a solo artist and began pushing her even further into the limelight.

By the early ‘70s, the Staples were unstoppable as they experimented with contemporary folk, rock, soul, and even disco. Between 1971 and 1975 they’d crack the Top 40 a total of eight times, crossing into the pop mainstream without losing their church credibility. Two singles hit the top of the charts—the groove-heavy, far-out “I’ll Take You There” and “Let’s Do It Again,” a soundtrack song recorded for Curtis Mayfield’s Curtom Records.
The Staple Singers - "This World"
Featuring the infamous Muscle Shoals rhythm section and the Memphis Horns, the Staples tidied up their gentle folk-gospel and traded it for a far funkier sound. Produced by Stax co-owner Al Bell, this album saw the group part ways with Pervis, making even more room for Mavis’ lead-vocal to shine. Adapting to the soul energy of Stax, it balanced modern, southern funk without losing the bluesy gospel their fans had come to associate with the group. The album include three Top 10 R&B hits—“I’ll Take You There,” “Respect Yourself,” and “This World.”
Originally part of a soundtrack to a comedy film of the same name starring Jimmie “Dynamite!” Walker, Bill Cosby, and Sidney Poitier, “Let’s Do It Again” was written and produced by Curtis Mayfield and performed by the Staple Singers. By 1975, The Staple Singers had been releasing socially conscious message music for more than a decade. Staying relevant meant keeping up the times, and the Staples made a bold move with this release. Much to the dismay of some of their more orthodox fans, the record introduced a far edgier, sexier side of the Staples. With Mayfield at the helm, “Let’s Do It Again” was the group’s last single to top the Billboard R&B charts.