Fleetwood Mac's 1977 album Rumours was the one that transformed them from hugely respected rock survivors into a global phenomenon. Their double-album followup Tusk (1979), however, was more adventurous. Arguably, it stands as the definitive example of a band at the top of its game, defying its record label to produce a magnificent album that didn't simply repeat the proven winning formula of its predecessor. 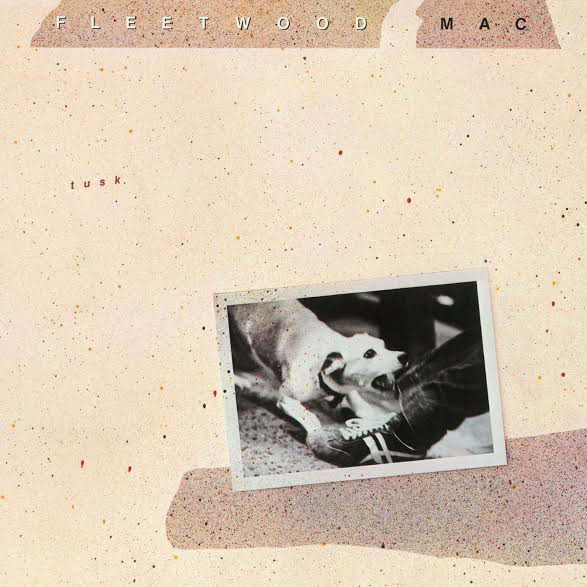 Such had been the success of Rumours—it had sold over 10 million copies by February 1978—that Tusk was released a week earlier than first announced, on October 8, 1979, because radio stations across America were playing unauthorized leaked tracks.

Quite apart from the inescapable musical excellence of the songs on Rumours, its success had been propelled by a public fascination with the intertwined romantic relationships that had evolved in the band and were detailed in the songs. It was an album where the real lives of the artists became virtually indistinguishable from the songs they were singing. This had happened before, with The Mamas & The Papas, and it would happen again with ABBA, but Rumours was the moment when the phenomenon of confessional pop songwriting truly captured the imagination of the record-buying public.

It resulted in a level of intrusion that not only took the band by surprise but also would eventually color their conceptions of what to do next. Lindsey Buckingham, the band's main songwriter/guitarist, explained. "Rumours was out of control in terms of the phenomenon," he said. "The music was good, but it got to the point where I thought much of our success was based on us being this living musical soap opera, where our lives were just there for everyone to examine. It brought out the voyeur in everyone."

Understandably, Warner Brothers was keen that the band should simply do it again, but Buckingham in particular had no inclination to pursue that direction. "A lot of people wanted us to do Rumours II," he has stated. "And there was a real need to break that mold right away, so we didn't fall into that trap, and that's what Tusk was about."

The band used profits from Rumours to build their own studio, but most of the tracks that made this album so distinctive were recorded by Buckingham, on his own, at home. "A lot of them were just Lindsey by himself, experimenting with sound in his home studio," Christine McVie revealed subsequently. "He was using his voice as an instrument, putting whole tracks together back-to-front and so on. Some of it was really crazy. But if we hadn't let him do that, he would have left the band there and then."

Anyone wondering what to expect should have been alerted to where the Mac was headed when the album's first single, the titular "Tusk," was released on September 19, 1979. An exceedingly bizarre choice for a single, this was one of Buckingham's furthest-out explorations of sinister riffs, weird chants, and ambient found sounds, interrupted by a marching band recorded live at Dodger Stadium in Los Angeles. John McVie's sinuous bassline snakes under Buckingham's forlorn lyric until a frantic drum break leads into a lengthy fade-out. Somehow, though, it all fits together and, encouragingly, it became a Top 10 single in the US and UK.

When the album appeared, its astute opening track was a languidly sumptuous Christine McVie song, "Over And Over," which would have fitted perfectly on Rumours. However, any fan anticipating more of the same deliciously dreamy fare would have been shocked wide-awake by the Buckingham track that followed, "The Ledge."

Sounding utterly wired, Buckingham delivers a sparse, almost demo-like cut, in which speedy lyrics rattle atop a fuzzy bass and simplistic snare drum for an exhilarating two minutes, before the track unexpectedly disintegrates into an anti-climactic denouement.

Given that Buckingham was determined to make the band relevant to a contemporary audience, the punky, new-wave thrust of "The Ledge" made perfect sense. But for any long-term Fleetwood Mac fan who had journeyed with them from their exquisite mid-'60s Brit-blues origins to the AOR perfection of Rumours, this was a near inexplicable volte-face. It was hard for such devotees to appreciate the intricacy of this track's vocal melody, the subtlety of the backup voices, or the sweetness of the harmonies, while at the same time they were being smacked around the chops by furious instrumentation.

Christine McVie restored the balance again with "Think About Me," another delightfully chugging Rumours-like clone, but even here Buckingham's straining harmonies add a touch of emotional angst. "Save Me A Place," another Buckingham composition, provides a calming middle ground between his new wave inclinations and the band's adult rock history, with a relatively smooth rumination on enduring love.

Stevie Nicks makes her first appearance as a songwriter on Tusk with the piano-led "Sara," about her best friend whose romance with drummer Mick Fleetwood ended her own dalliance with him. Again, this delicately flowing song of heartbreak and friendship would have fitted neatly into Rumours—but on turning the first vinyl disc over to side two, that mood is shattered by the crashing drum intro to Buckingham's "What Makes You Think You're The One?". This is another sparsely arranged burst of anger, sweetened only slightly by guitar harmonics, and ending, like "The Ledge," with a collapse rather than a conclusion.

With the pattern established by these opening tracks, the album proceeds in similarly schizophrenic fashion, so that Nicks's introspectively tranquil "Storms" nuzzles up against Buckingham's equally introspective but more passionately performed "That's All For Everyone," before his "Not That Funny" resumes the abrasive, energized pop-punk vibe of "The Ledge."

Nicks offers up a pair of her patented witchy-woman meanderings with the crushed velvet vibe of "Sisters Of The Moon" and the spectrally ambling "Angel," contrasting starkly with the twitching and writhing of Buckingham's "That's Enough For Me," which weighs in at less than two minutes.

Christine McVie adds to her tally of immaculately conceived love songs with the seductively sensual "Brown Eyes," swimming in percolating waves of keyboards. Next, her definitive doormat drama "Never Make Me Cry" succeeds almost miraculously in combining a submissive-woman trope with a strong, independent earth-mother vibe.

Anyone who had stuck with the album to this point would no longer be shocked by the desperation in Buckingham's jangly "I Know I'm Not Wrong" or by its quirky synth solo, followed over on side four by Christine McVie's "Honey Hi," a perfect companion piece to her earlier tracks on Tusk, if a shade more lightweight. Similarly, Nicks's "Beautiful Child" chimes so well with her other contributions here that it's tempting to think of Tusk as three albums, one by each of the band's main songwriters.

Wisely, Buckingham's achingly lovely "Walk A Thin Line" was saved for a late appearance on Tusk. Few songwriters would be brave enough to utilize a guitar solo as simple and predictable as he does here, or to insert a seriously retro "ooh-wah-ooh-wah" backup vocal, or prop it all up on clattery carefully-out-of-sync double drums.

To Christine McVie, who opened Tusk, goes the honor of closing it with the suitably optimistic and gently undulating "Never Forget," another composition that would have fitted perfectly on Rumours.

Production costs on Tusk were estimated at over a million dollars, making it the most expensive rock album recorded to that date. Although extravagant, those costs were a drop in the ocean compared to the profits that have continued to roll in for decades from the Fleetwood Mac catalogue. But as Buckingham rightly remembered: "When the people at Warners first heard Tusk, they saw their Christmas bonuses going out the window." His abrasive, minimalist rock tracks had been the last thing the label expected to hear.

Disappointingly, when the album hit the record racks in October, the press reaction was muted. Creem called it "dull" while the Los Angeles Times grumbled that it sounded like "a random collection of tunes," a not entirely unjustified observation. It certainly lacked the coherence of Rumours, but that was precisely what Buckingham had been striving to achieve.

Inevitably, compared to Rumours, Tusk was regarded by Warner as a commercial failure, selling a meager four million copies, but its stature has grown over the years, acknowledged as an influence by artists as diverse as Air, The Strokes, and Vetiver.

"When we didn't sell 60 million albums," Buckingham reflected wryly, "the band said, 'We're not going to do that anymore. You're not going to go back to your house and work on stuff by yourself.' And that's when I started making solo albums."

Subsequent Fleetwood Mac albums tended to satisfy the existing faithful by adhering to a Rumours-like template. Buckingham, however, continued to poke his fingers into the gaping holes in rock's stylistic boundaries. Law And Order (1981) saw him off to a flying start, delivering a Top 10 smash in the breathlessly scintillating "Trouble." Although his solo work has never approached Fleetwood Mac's titanic sales tallies, his unique musical vision has always assured him of critical acclaim, while his pop sensitivities have ensured that no matter how experimental he becomes, there's always a melodic core and, usually, an eminently sing-able hook in every track.

For proof, look no further than Go Insane, which followed in 1984. The title track is quintessentially catchy pop undercut by his typically edgy vocal, but the real meat and potatoes arrives with the two closing cuts, "Bang The Drum" and "D.W. Suite." The first hinges on a huge chorus and an irresistible descending guitar line, almost baroque in its magnificence, while the second is a seven-minute long audio triptych ranging from folksy Irish melodic interpolations to semi-religious psychodrama, a chiming grandfather clock to a ranting rocked-up reinterpretation of "The Bonnie Banks O' Loch Lomond." Bonkers? Indubitably. But it works.

His third solo album, Out Of The Cradle, was released in 1992, by which time he had left Fleetwood Mac. Here he acknowledges further his eclectic roots with the fingerpicking intro to "Don't Look Down," a delicate homage to the gospel standard "All My Sorrows," and a sensitive solo-guitar interpretation of the Rodgers & Hammerstein gem "This Nearly Was Mine."

It was a further 14 years before he followed up with Under The Skin, but cuts like "Down On Rodeo," where he performs major surgery on the Hollywood lifestyle, showed he had lost none of his rebel instincts or his gift for crafting soaring hooks.

His subsequent albums Gift Of Screws (2008) and Seeds We Sow (2011) confirmed that the years were not going to water down his brilliance, and a reunion with Christine McVie for Lindsey Buckingham–Christine McVie (2017) proved that if he ever did feel like knocking out Rumours II, it wouldn't be too difficult.

There's something more than a little magical about the realization that this astonishing legacy has grown out of Lindsey Buckingham's determination to do what he believed he could do rather than what the business wanted him to do.