Neil Young's Pono music players—his triangular iPod-like devices meant to bring high-resolution digital audio to the masses—were announced in 2012, brought to market in 2014, and were, by 2017, officially dead. Young discusses his hi-res ambitions and the project's failure in a new book, To Feel the Music, published earlier this month.

Eyeing a world largely content to download mp3s (the world in which he began conceiving Pono) or one content to stream audio at even lower qualities (the world in which Pono failed), Young wanted to make an affordable consumer device and download service for hi-res music files. While audiophiles can and sometimes do pay up for premium audio and best-in-class digital-to-analog converters, PonoPlayers were to be an accessible consumer product. Mainstream listeners, however, greeted them with a collective shrug. 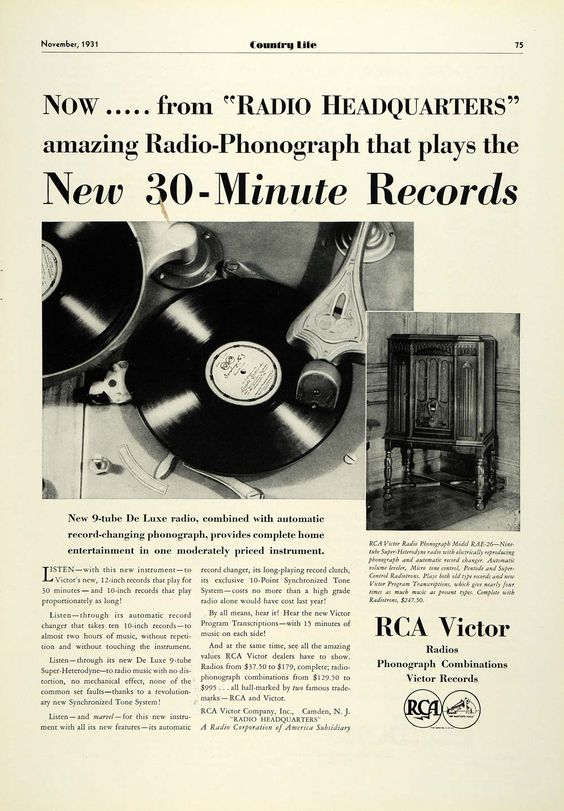 Pono is by no means the only example of a new medium failing to find an audience. Look back to the early years of the electrical recording era, when microphones were new and most records were still pressed in shellac, and you'll find an analogous tale.

As many vinyl enthusiasts will know, Columbia Records introduced the LP in June 1948. But the 12-inch, 33 1/3 rpm record made its first debut September 17, 1931—nearly 17 years earlier—by RCA Victor. Columbia's LP took off almost overnight, sparking a new standard for vinyl records that's still largely with us to this day. So why did RCA Victor's attempt so quickly fade, without so much as a whimper?

Back in '31, at a large listening ceremony at New York's Savoy-Plaza Hotel, RCA Victor presented its new format to "more than a hundred musical celebrities, prominent editors, and educators," according to a statement released the following week.

Helping to demonstrate the new medium's capabilities alongside RCA Victor's David Sarnoff was Leopold Stokowski. As the conductor of the Philadelphia Orchestra, Stokowski's experimental recording techniques brought bold new colors out of his orchestra at a time when other conductors still looked at microphones with a distrustful sneer. He wanted to capture a full performance on one disc—an impossible task for that era's leading medium, the 78-rpm, 5-minute-per-side shellac record—and this new medium, what RCA Victor called Program Transcriptions, would finally allow it.

Most listeners today will know Stokowski through Walt Disney's Fantasia; the reverberant strings that soundtrack Mickey's broom-and-bucket routine during "The Sorcerer's Apprentice" and other scenes were his and the Philadelphia Orchestra's. At the Savoy-Plaza Hotel in the fall of '31, it was their version of Beethoven's 5th Symphony, pressed for the first time on a single disc, that made an impression, or, rather, failed to do so.

The disc contained 15 minutes of music per side. Listeners at the time thought the sound was an improvement. But following the launch and a string of other long-player releases—which included more from Stokowski, renditions of George Gershwin tunes, and even performances by Duke Ellington and His Orchestra—RCA Victor's general manager, Edward Wallerstein, closed down production of the line in 1933.

While the term "Program Transcriptions" never stood a chance against "LP" in terms of marketability, why exactly RCA Victor's long-playing records were a commercial failure can be traced to a few reasons. Mostly, it was timing.

In hindsight, it's easy to see that the first years of the Great Depression were not a good time to release a new product. The Depression began in 1929 and worsened for years. From 1930 to 1931, the number of records RCA Victor sold tanked. From '31 to '32, that number halved again. Even outside the difficulties of introducing a new format, radio was supplanting records as the new entertainment king. As a whole, the record industry wouldn't truly jumpstart back to life again until after World War II.

While 11-minute-per-side transcription discs had been used to provide the soundtracks to silent movies since the mid-'20s, playback processes at movie houses were far different than those in people's living rooms. For its newly released long-players, RCA Victor had to make and distribute home audio consoles that could play both 78 rpm records and 33 1/3 albums—but of course, a public unable to buy records was largely unable to buy new consoles as well.

A demonstration of an RCA Victor console and a long-playing record from the early '30s.

"The idea was good and they might have sold, but there were technical problems. Most of the records were made from Victrolac, a vinyl compound developed by Jim Hunter; the pickups available at that time were so heavy they just cut through the material after several plays. The complaints from customers all over the US were so terrific that we were forced to withdraw the LPs. If you could get a new pressing of one of these records today and play it with a modern lightweight 2-mil pickup, it probably would sound pretty good."

Between the end of RCA Victor's Program Transcription discs in '33 and Columbia's introduction of the LP in 1948, no long-playing records would be sold to the public, though long-playing formats continued to be used to broadcast pre-recorded radio shows across the country—and, after the outbreak of war—for homesick troops across the world.

In the meantime, Wallerstein made the jump from RCA Victor to Columbia, pushing the company to develop its own consumer-level long-playing format. Lying in wait, he insisted that Columbia make lacquers at both 78 rpms and 33 1/3 rpms for the decade leading up to the LP's official debut, so that Columbia would have a stockpile of recordings to release in the new format once it was able to do so.

By 1948, not only had Columbia decided on the succinct name "LP," but their in-house inventor Peter Goldmark had developed the microgroove technology that would allow for 25 minutes per side. He also introduced other improvements to the disc and playback systems, ensuring the format's full, clear sound could still be sustained after many repeated listens. Higher-quality music, longer playing times, the postwar economic boom—it all coalesced to be a huge success.

When the LP was unveiled, RCA Victor's David Sarnoff—former boss to Columbia's Wallerstein—cried foul, saying that Wallerstein had stolen RCA's idea. In a 1950 hearing in front of the Federal Communications Commission, recounted in Greg Milner's Perfecting Sound Forever, he said:

"The man who was at the head of the record business deserted us, went to the Columbia Phonograph Company, and told them all about the developments that we had in our plant. This 33 business was an attempt on the part of Columbia to beat RCA to the punch."

Columbia released a decidedly better format almost 17 years after RCA Victor's first attempt—so to say Columbia "beat RCA to the punch" is, of course, not quite true. But while much of the record-loving public may not remember RCA Victor's Program Transcription discs, the long-playing format it helped spark endures, thanks in part to some stubborn insistence, back in 1931, that one should be able to hear more and better music.

Perhaps Neil Young can find some solace in this history. The Pono may be destined for junk drawers, but hi-res audio may just become standard in time.