If you dig in the bins long enough, you’ll eventually see the mysterious four-letter word that grabs the attention of every collector sooner or later. Mono. It’s like a magic spell. You’ll see it printed on the jacket of vintage discs, bolded on the hype sticker of a remastered classic, and sometimes even touted on the cover of a new album. Looking at you, Sonics. But, what really is the difference between a stereo and a mono pressing? Is there something to the mono magic or is it purely nostalgia-driven? When given the option between these two formats, what sort of things should you take into consideration? Let’s take a look. 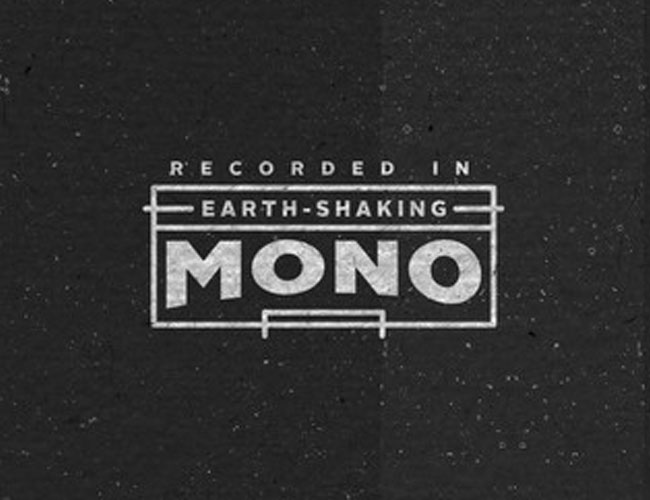 First off, what is mono?

On a mono record, there is only one channel of information. Simply put, this means that your left and right speakers are playing exactly the same thing. On a stereo recording, instruments can be mixed to be on the left, right, or anywhere in between. A mono recording has everything coming out of the same speakers, and so the soundstage focuses more on individual instrument volume and EQ. Although there had been experiments in stereo recording for almost as long as recording itself had been around, all commercially available recordings came in mono up until the late 1950s. Even then, pop and rock music was often mixed for mono, even as stereo classical, jazz, and novelty recordings became popular with hi-fi audiophiles. AM radio—the life-blood of pop music—was a mono-only format, and the single-speaker record players most young music buyers had were, of course, mono. It wouldn’t be until the later 1960s, with the ensuing popularity of stereo-capable FM radio, that the majority of pop and rock music would make the change to stereo.

Ok. So why should I care?

This is the fun part. Separation of sound isn’t the only difference when we’re talking mono vs. stereo. When stereo first starting taking hold at the record store, labels and artists had the idea that not only should the music sound different, but that the entire stereo experience should be different as well. The mixes used for the stereo version of a lot of albums you know and love were not the same as the original mono mixes. Not only that, but sometimes entirely different takes were used.

Some of these differences can be pretty minor, such as on The Kinks’ “Death of a Clown” (released in 1967 as singer Dave Davies’ debut solo single, but also appearing on The Kinks LP Something Else). On the stereo mix of the track, Davies’ vocals on the first chorus are double-tracked, but not in the mono. Other examples, however, are much more apparent. For example, the end of Pink Floyd’s “Interstellar Overdrive” (from 1967’s The Pipers at the Gates of Dawn) in mono is a hard-driving coda to the opening riff and features some mind-expanding vibrato. In stereo, it is a psychedelic blender as the music shoots back and forth between the speakers.

Pink Floyd - "Interstellar Overdrive" (Stereo Version)
Then there are The Beatles—whose most famous versions of songs are at times stereo, at times mono. For example, the stereo version of “Helter Skelter,” from 1968’s White Album, has that famous fade-in at the end where Ringo shouts about blisters on his fingers. But, the mono version of “Lucy in the Sky with Diamonds,” from 1967’s Sgt. Pepper’s, has an extra layer of dreamy flange effect on the vocals. The mono version of “Blue Jay Way,” from the following LP Magical Mystery Tour, doesn’t have the backwards vocals that make the song so creepy-sounding. The key of the stereo version of Sgt. Pepper’s “She’s Leaving Home” has been dropped a semitone from F to E.
Many bands, like The Beatles, saw stereo as a bit gimmicky and so focused more on the mono mix than the stereo. Many stereo mixes were done by studio engineers and producers with less than full cooperation from the artists.

These kinds of differences are common when comparing stereo to mono mixes. Bands would do many takes of each song, so there was a lot to choose from when compiling a master tape. Many bands, like The Beatles, saw stereo as a bit gimmicky and so focused more on the mono mix than the stereo. Many stereo mixes were done by studio engineers and producers with less than full cooperation from the artists. Other artists, however, embraced this new presentation for their work.

Another thing to keep in mind is that those early stereo mixes were limited by the technology of the time. The industry still learning how to bring this newfangled thing into the world. It is really common to hear a ‘60s stereo mix where all the guitars are on one side, the vocals on the other, and the drums in the middle with absolutely no bleedthrough at all. This is called “hard panning” and it can definitely make for a challenging listening session, depending on your room setup and personal preferences. It may or may not be fun with headphones too.

One of the reasons why mono has some renewed interest though is exactly because stereo replaced it. By the time CDs arrived, the stereo mixes of most albums had become the “official” mix. As records went out of print, people were left with only the stereo option when they bought a new copy on CD. Within 15 years, many mono mixes were more or less forgotten about. Now, people new to vinyl and more than a few returning fans are dusting off those stashed records and hearing old favorites in a “new” old way. 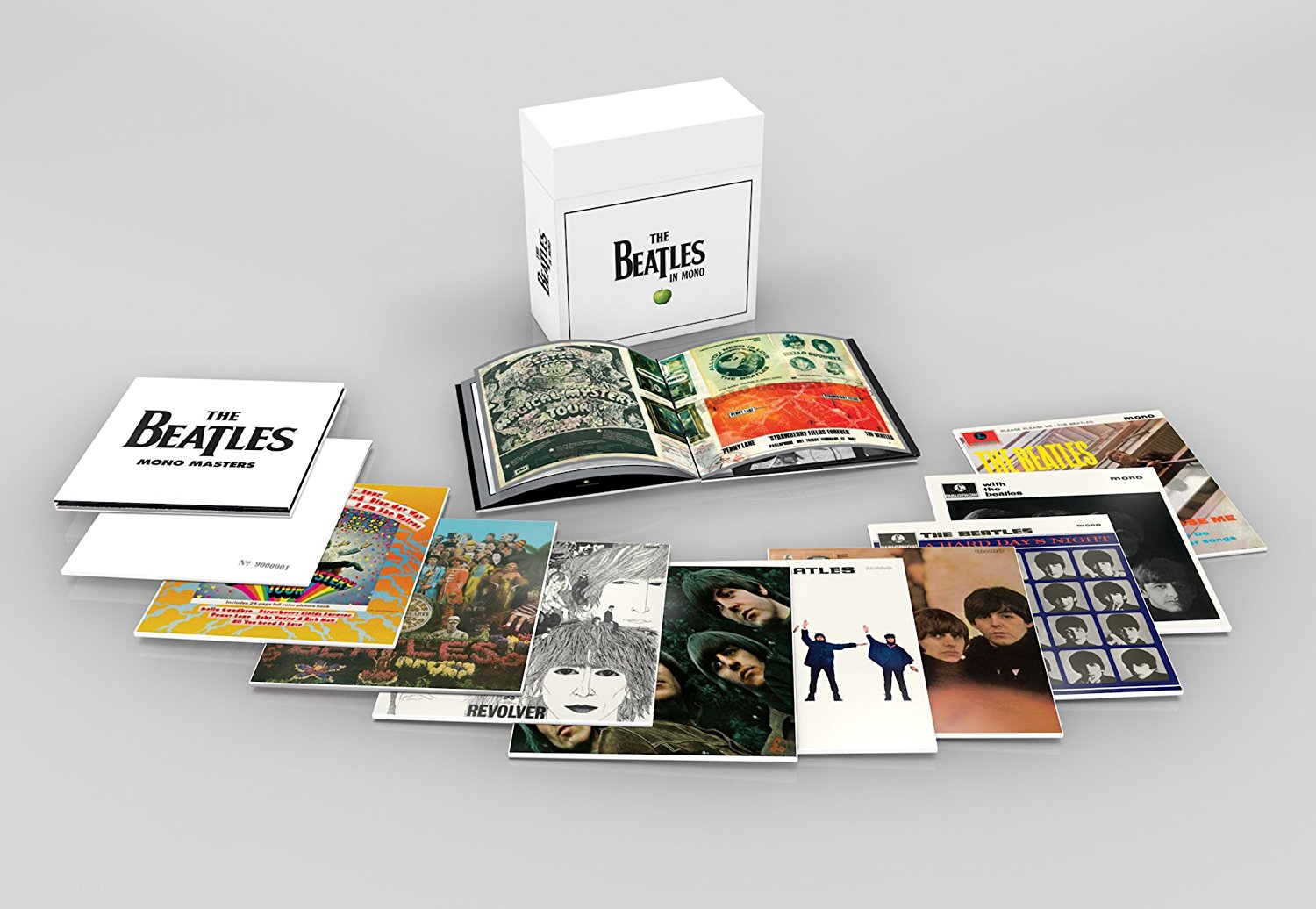 The Beatles - "The Beatles In Mono" (2009)
Many record labels are re-issuing the original mono mixes in order to feed the demand. This is good news, as a lot of those original mono records are getting hard to find and the prices aren’t going down any time soon. That said, even some of the re-issues are starting to go back out of print. The Beatles In Mono box, for example, was released just in 2009, but is already becoming a rarity.
If you like your music to have a bit of punch to it and hit you from straight on, I’d suggest mono. If you like things to fill the room and spread out a bit, maybe stereo would be more your thing.

Alright! So, which one is for me?

If you like your music to have a bit of punch to it and hit you from straight on, I’d suggest mono. If you like things to fill the room and spread out a bit, maybe stereo would be more your thing. Curious about what the artist intended when the album was first released? Do some research and see which version they preferred. And if you're interested in how different mixes change the tone of a song, you may want to go ahead and get one of each.

Some people find the hard-panned nature of early stereo to be off-putting. Some people love it. That is a serious consideration when deciding between stereo and mono. If it’s always bothered you that the guitars are nowhere near the vocals or drums, mono might be just what you’re looking for. That said, stereo can bring out elements previously buried in a mono mix. Some stereo mixes, hard-panned or not, have great clarity. It will often come down to what you want out of the experience and the type of music you’re listening to.

This record says “electronically enhanced for stereo.” What the heck is that?

As stereo started replacing mono, record companies started looking for ways to repackage previous releases for this new format. Many of these albums were recorded in mono and there wasn’t a stereo master to press from. So, they got creative and fake stereo was born. “Duophonic,” “Electronically Enhanced for Stereo,” “Re-Channeled,” etc. It goes by many names. Essentially, the unaltered mono track is put on the left or right channel and a re-EQ’d and reverbed/delayed version of the same track is placed on the other channel. This tricks your brain into thinking that you’re hearing an actual stereo soundstage when you are not. If you don’t listen closely. Try one and see what you think. They’re usually in the dollar bin.

Ok, I bought some mono records. Do I need any special equipment to play them?

No. If you have a vinyl rig already, you are set to start enjoying some glorious mono sound.

But what if I want to buy some new gear?

Well, that’s different. Stereo records have information both laterally in the groove as well as vertically. Mono records only have lateral information. Anything your stylus runs across on the vertical part of the groove will only result in surface noise. Mono cartridges are designed to only pick up the lateral information. Using a mono cart will greatly reduce pops, clicks, and generally increase clarity. There are many options both new and vintage here.

Many older amps and a growing number of new ones have mono switches. Engaging the switch will sum the left/right channel information. This will help as the surface noise on the record won’t be popping and clicking in stereo while the music plays in mono. It isn’t as good a solution as having a mono cart, but it works.

Finally, if the above options aren’t available to you, there is the trusty old Y-cable trick. Get two Y-cables and connect one so that your turntable outs are summed into one. Connect the other Y-cable so that it is splitting that single connection back into two connections and plug those into your phono input. That more or less approximates what the mono switch does.