The death of Scott Walker earlier this year brought to a close one of the oddest of creative journeys. There were at least five phases in a career lasting more than half a century: orchestral pop chart idol; sophisticated MOR crooner; Brel-championing art song interpreter; night club country entertainer; avant-garde experimentalist. These phases, though, were not strictly sequential, and 50 years ago Walker compressed most of them into an extraordinary nine months of activity that saw him dive from commercial heights to failure. 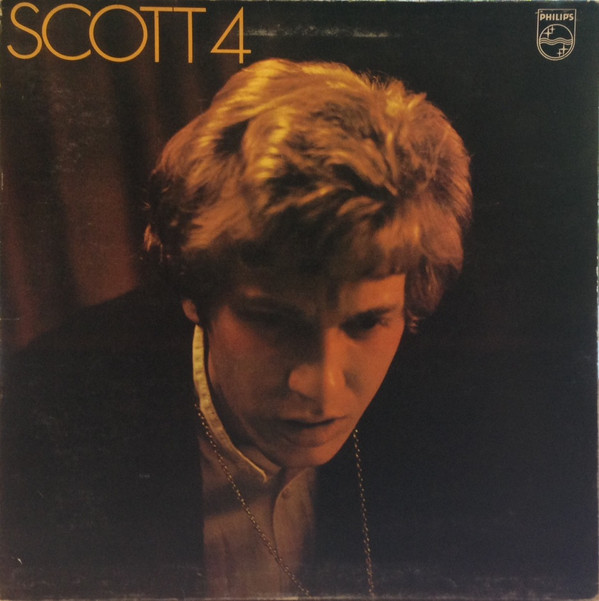 Between March and October 1969, Walker released two charting albums and a non-album hit single, hosted his own TV series, and produced two jazz albums. Then came Scott 4, now the most revered of his albums. Understanding it requires some context.

After The Walker Brothers split in 1967, Scott embarked on a solo career that matured with his audience. His first two albums, Scott (now generally referred to as Scott 1, released 1967) and Scott 2 (1968), mixed elegant originals, Brel interpretations, and other well-chosen covers, all richly orchestrated, impeccably sung, and very successful.

By Scott 3 (released March 1969) there were hints of change. Mild dissonance in the strings on "It's Raining Today" points to the later experimental period, while the orchestrations step back from the Spector-like wall of sound that characterized The Walker Brothers as well as solo albums 1 and 2. There were more Walker originals, too, and just three covers, all Brel songs. The album was Top 10 in the UK but didn't linger in the chart as long as 1 and 2, an indication that Walker's fanbase was thinning out. Even so, it still seemed like a career in ascendency.

At 9:55 pm on Tuesday, March 11, 1969, Walker opened the first of six 25-minute episodes of his own BBC1 TV series. There had been two pilots in 1968, the format of which continued through to the series: Scott sings his hits, and duets with generally MOR guest artistes, including Dudley Moore, Kiki Dee, Jackie Trent, and Tony Hatch. No footage remains, though audio bootlegs seem to indicate that Walker was not as uncomfortable as you might expect, given his later retreat from pop stardom.

Barely pausing to catch breath, Walker released a non-album hit single, "Lights Of Cincinnati" (June), and the album Scott Sings Songs From His T.V. Series (July). This consisted of re-recordings of some of the covers he'd sung in the shows, and it charted well in the UK. He also produced two Brit-jazz albums, Ray Warleigh's First Album and Fall Out by Terry Smith.

Amid all this apparent career buoyancy there were intimations of discontent, with Walker ominously telling the Melody Maker, "I want to be alone." He then cancelled a week's residency at the Golden Garter Theatre in Manchester—a nightclub specializing in popular entertainers—and declared that he would now work under his birth name. So it was Scott Engel, not Scott Walker, who released Scott 4 in November 1969.

The album was recorded in Olympic Studios, London, with Walker's regular producer, John Franz. Perfectly balanced at a little under 33 minutes, it has a compactness all but lost later when albums gained middle-aged spread with the advent of CDs. If 3 dialed down the grandiosity, then 4 goes further still. The lush strings remain, but the dominant instruments are nylon-string acoustic guitar and bass. Drums are generally mixed low, with the bass carrying the rhythm.

Having said that, the album opens in epic style with "Seventh Seal," based on Ingmar Bergman's 1957 film of the same name. Featuring a strong bass/guitar rhythm driven by an insistent tambourine, Walker's telling of the Bergman story is surrounded by a Morricone-style trumpet and a grand choir. By contrast, "On Your Own Again" starts with Walker singing over a spare guitar pick, before the strings join in and the song draws to an unresolved close at well under two minutes.

"The World's Strongest Man" nods to Bacharach, the pause before the chorus a hook in a song that sounds like it should have been a hit. "Angels of Ashes" is lyrically impressionistic, and "Boy Child," which closes side one, even more so. "Boy Child" has become a touchstone Walker composition. With no drums and an ascending melody picked out on what is probably a cimbalom (like a large zither), it hints at Walker's later abstract style.

"Hero of the War" opens side two with heavy bass and syncopated, strummed nylon-string acoustics. On "The Old Man's Back Again (Dedicated to the Neo-Stalinist Regime)" the loping, funky bass leads. "Duchess" is one of the album's two country influenced songs, continuing a style Walker had already explored on Tim Hardin covers on earlier albums. The bass leads again on "Get Behind Me," joining fuzz guitar and female backing vocals in a rare Scott rock-out. The album closes with the second country number, "Rhymes Of Goodbye."

With 10 excellent songs, all originals, Scott 4 is now a canonical work, almost universally hailed as a classic. Yet when it was released in November 1969, it didn't chart, sold poorly, and was soon deleted. Why?

Admittedly, an album that opens with a song about a knight playing chess with Death might not be obvious chart material, but the album was stylistically similar to the Top 10 Scott 3, lyrically oblique but musically melodic and accessible. The two country songs and "The World's Strongest Man" all ooze hit single potential.

Walker speculated that maybe audiences were put off because too much of the record was in 3/4 time. More likely, it was the name under which it was released. People got their records from display racks in record shops then, and anyone looking under W for the latest Scott Walker album would have found T.V. Series, if 4 was filed under E for Engel. More likely still, it was market saturation. There had already been two albums in the previous nine months, plus a single. How many Scott Walker records could fans take?

Whatever the reason, the commercial failure of 4 struck at Walker's confidence in his own writing, and for the best part of a decade he retreated to nightclubs like the Golden Garter and covers albums. But not quite immediately. His next album, the overlooked 'Til The Band Comes In (1970), mixed some excellent Walker originals with covers, a similar recipe to 1 and 2. It, too, failed commercially, and the long artistic withdrawal began in earnest.

In the late '70s, The Walker Brothers reformed, scoring an immediate international hit with Tom Rush's "No Regrets." They couldn't maintain commercial momentum, however, and disbanded after a third reunion album, Nite Flights. This included four Scott originals that were lauded by Bowie, Eno, and a new generation of post-punk musicians, especially Julian Cope. He compiled Fire Escape In The Sky: The Godlike Genius Of Scott Walker, which introduced Walker's late-'60s solo work to a new generation. It included three songs from Scott 4. They sounded like messages from a lost world.

It's hard to credit now, in this age of availability, but in those days a record that hadn't sold and was deleted soon after release became almost irretrievable. Anyone looking for Scott 4 following the critical rehabilitation needed a lot of luck or deep pockets. This rarity contributed to the mystique that grew up around Walker and the album itself. Scott 4 was eventually reissued in 1992 under the name Scott Walker—and finally everyone could hear an album that lived up to its own legend.

About the author: Mark Brend is an author and a musician. His most recent book, The Sound Of Tomorrow (Bloomsbury 2012), explores early commercial electronic music. He lives in Devon, England.