Welcome to the first installment of Show Us Your Collection, a new Reverb LP series that explores and celebrates the records and beloved setups of record heads around the world.

Today we’re spinning with Matt Kessler, founder of the Too Many Records YouTube channel. For over four years, Matt has been a thought leader in the vinyl community, sharing music recommendations, vinyl hauls and unboxings, artist interviews, in-store record hunts, giveaways, and more. 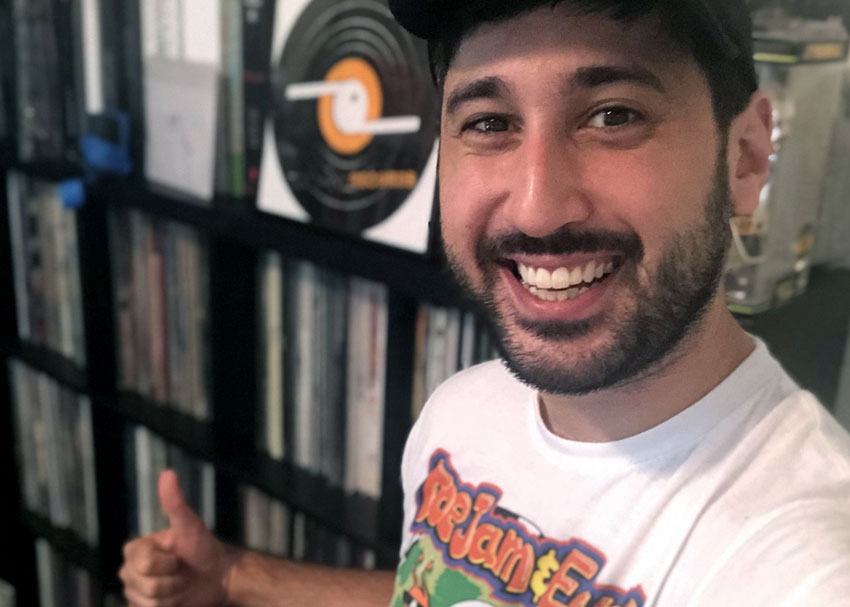 How long have you been collecting records? What's the size of your collection?

I've been avidly collecting records for almost seven years. My collection currently sits around 1,500 records. It was somewhere between 2,000 and 3,000 earlier this year, but I culled a lot of it at TMR Fest, an event I threw this March in Los Angeles. We had three awesome bands play (Tiny Stills, Fort Vine, and The Album Leaf) and I had a pop-up shop with 1,000 records from my personal collection. A lot of them sold, and made my recent relocation to NYC a lot easier. Over 300 people showed up, and it was beautiful. Hoping to have the second TMR Fest in 2020 on the East Coast.

What was the first record you purchased? Is it still in your collection?

The first record I ever purchased was actually in 2011, before I got heavily into vinyl. It was my favorite album, Alligator by The National. I created a short film while living in NYC prior to moving to LA that was heavily inspired by and featuring music from that album, and I thought it would be a cool Easter egg to have the album jacket hanging on the wall. That specific record accidentally got left behind on set and I never saw it again. I have since replaced it with a limited-edition version of the album on green vinyl. 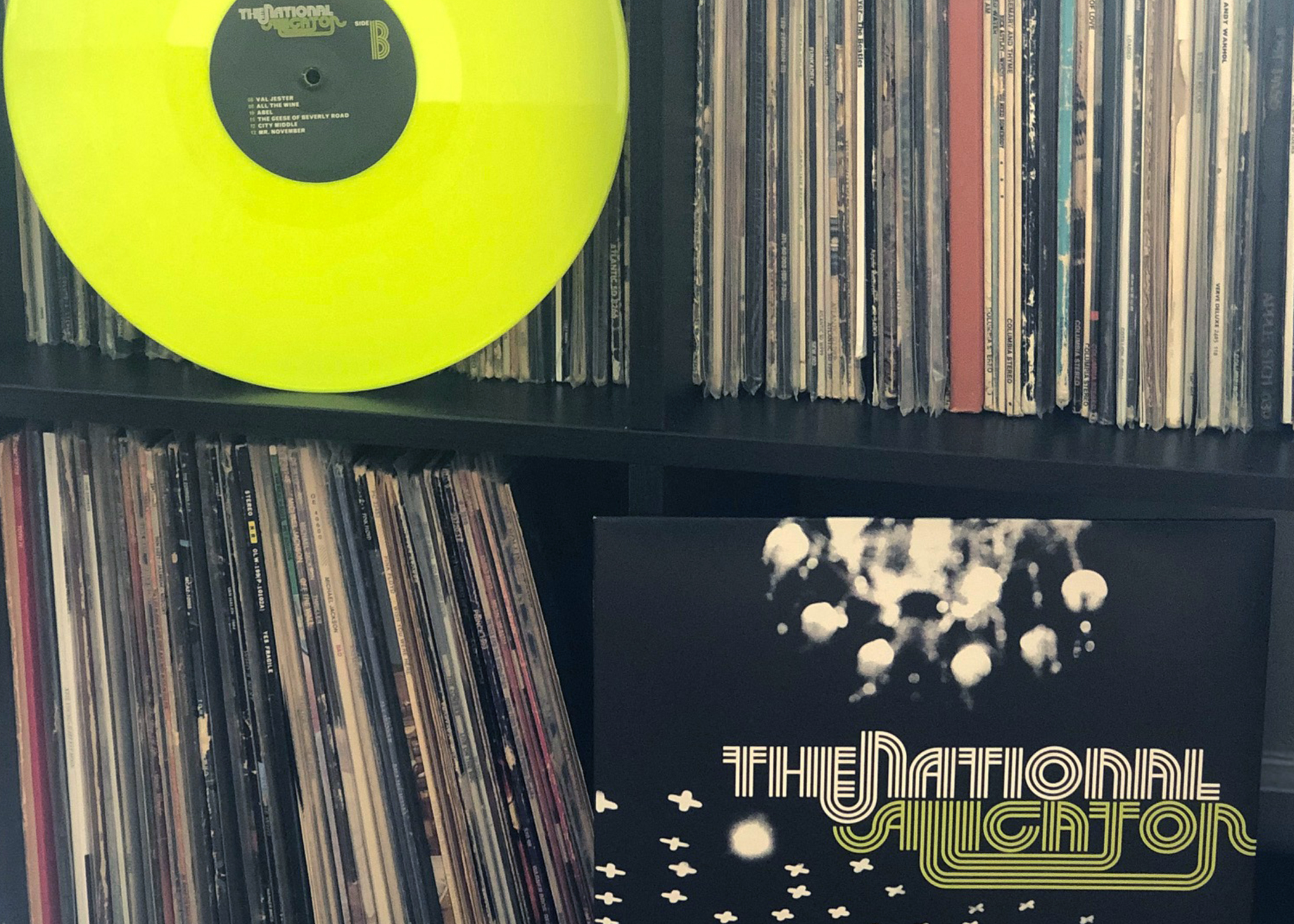 What inspired you to start a Youtube channel documenting your love of vinyl?

I've always loved performing and sharing my passion for music with people, and when my co-host Sandy from the channel's first iteration, Damnit Sandy, suggested I make a YouTube channel to share my encyclopedic knowledge, document my collection, and recommend music to people, I thought it was a great idea. I'm humbled and elated that so many people care about what I have to say when it comes to the hobby, and appreciate my recommendations for artists to try and records to buy.

Walk us through four of your favorite records in your collection. What's the story behind them and how'd you track them down? 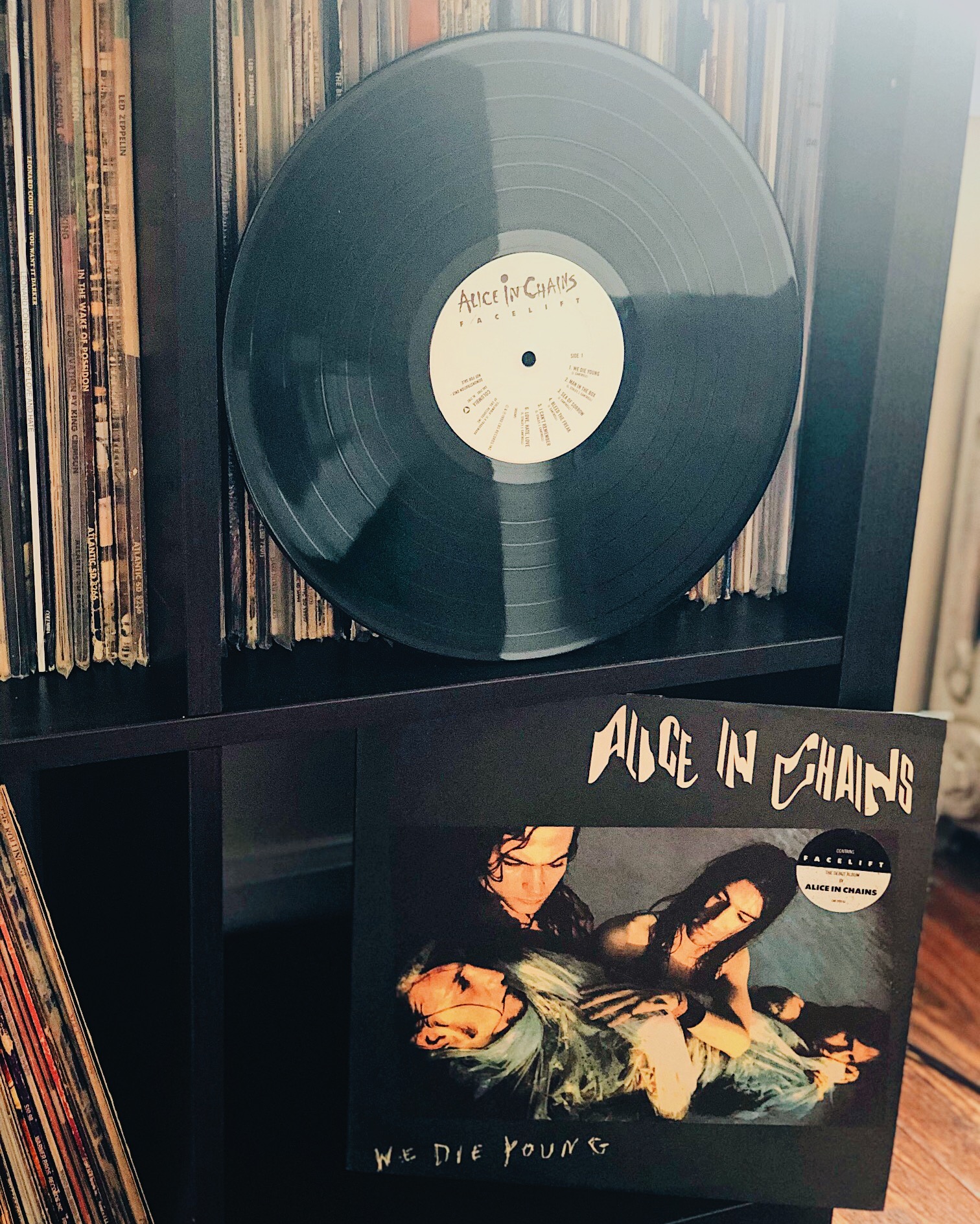 I was digging through records at Amoeba, and hit up the Alice in Chains section. Normally the usual suspects are there, reissues of the majority of their early discography and the occasional Black Gives Way To Blue. This time, however, an unfamiliar record revealed itself. Used, and for $35, was an EP, We Die Young, that came out around the time of their debut record. I grabbed it, being a very big AiC fan.

Upon bringing it home, I realized that there was a sticker on the jacket that said "Contains Facelift, the Debut Album By Alice In Chains"—and I pulled the disk out to see that it was NOT the EP I thought it was, but rather a promo copy of Facelift, in full. Which is crazy enough in its own right, because it still, to this day, has never had a proper US press. I can't even put a concrete value on this thing, and I've never seen it pop up on discogs, but to me, it's priceless for the story alone. 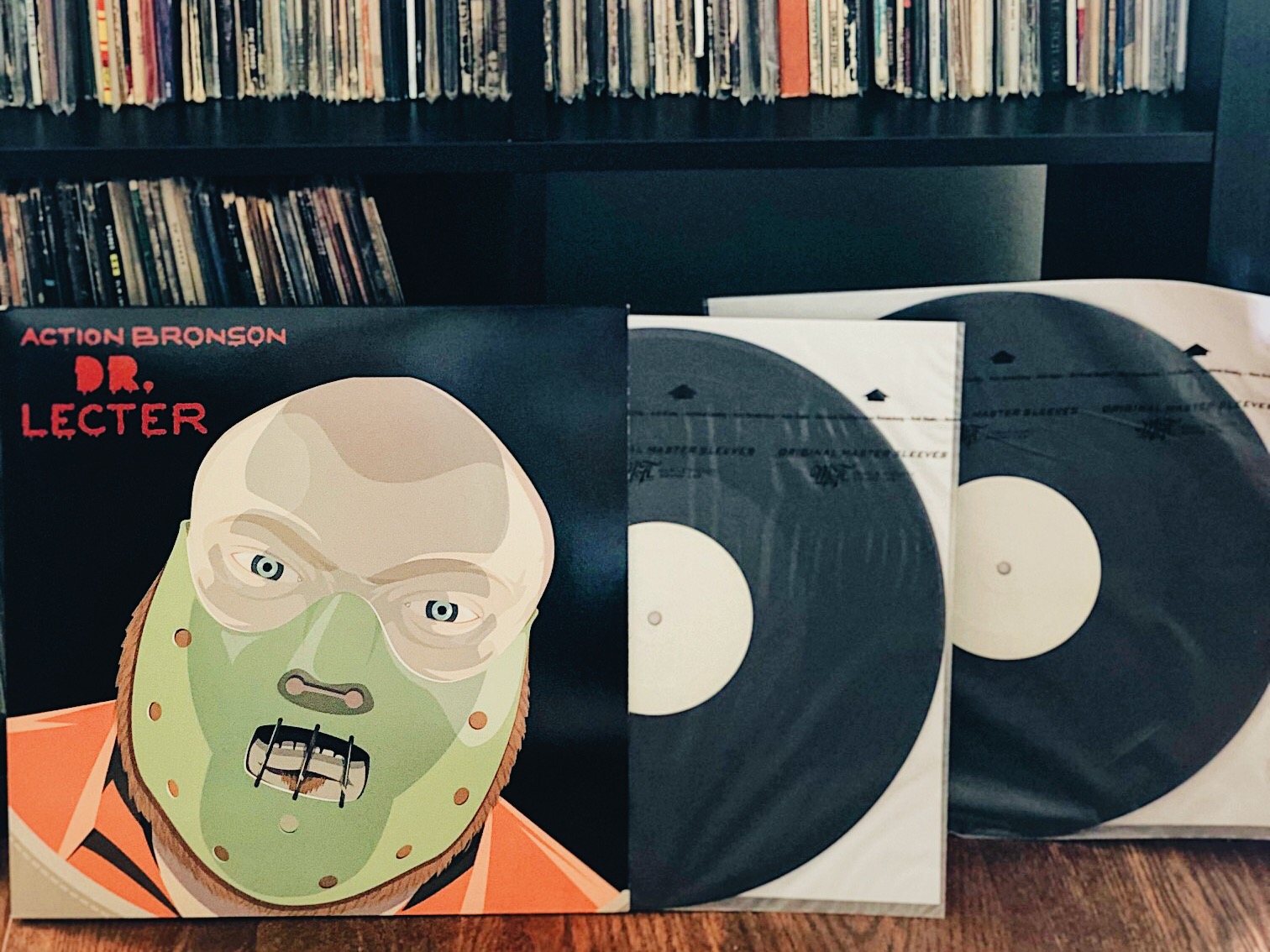 Similar slip-up as the above story. I was at Gimme Gimme Records in Los Angeles and saw on their rare wall "Dr. Lecter Instrumentals," a generic sleeve with a sticker denoting it as such. A UK label, Chopped Herring, pressed Dr. Lecter and Blue Chips, two mixtapes by the terrific Action Bronson, in very limited quantities a few years back and they sold out very quickly. Both of them are easily in the top three projects he ever released. I got lucky to find Blue Chips for a decent price, but Lecter eluded me. I'd never seen a Herring out in the real world, so I went to buy the instrumentals for the heck of it.

Upon bringing it home, I began to spin the first disk (this is what should have tipped me off…) and all of a sudden, Bronson started spitting his iconic flow over the beat, flooring and confusing me simultaneously. I went back and looked at the records, and realized that there were two, when there should have been one. Two white label records, containing the full album. Two… test pressings. How two TPs made it from the UK label to a LA record store with such a crazy mix-up is beyond me, but it's one hell of a memory now.

The "Instrumentals" at Gimme Gimme was $50, but a test pressing of this record easily goes for 8X that. The cherry on top of this story is that I emailed the owner of Chopped Herring, and told him what had happened, and asked him if he had any spare gatefold jackets available, and that I'd happily buy one. A few weeks later, he came through. Beautiful. 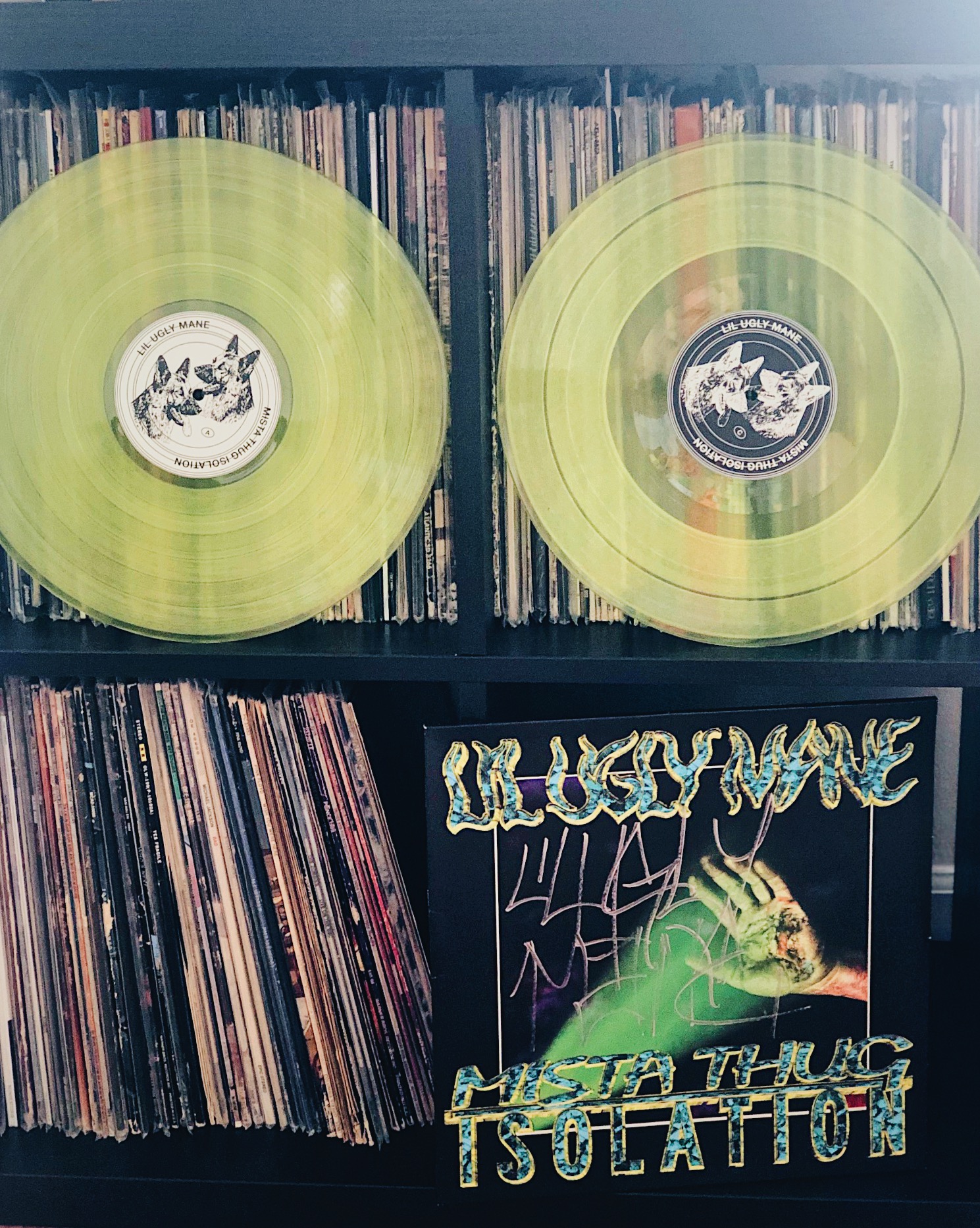 This is one of the most underrated hip-hop albums, period. My first purchase of it was the alternate cover version, but then they reissued it a few years later on highlighter-yellow vinyl with the classic cover, and I had to grab that too. This is one of my favorite albums, but it makes this short list because I brought it to a rare Lil Ugly Mane show last year and he signed the cover for me, so now it's even more special. 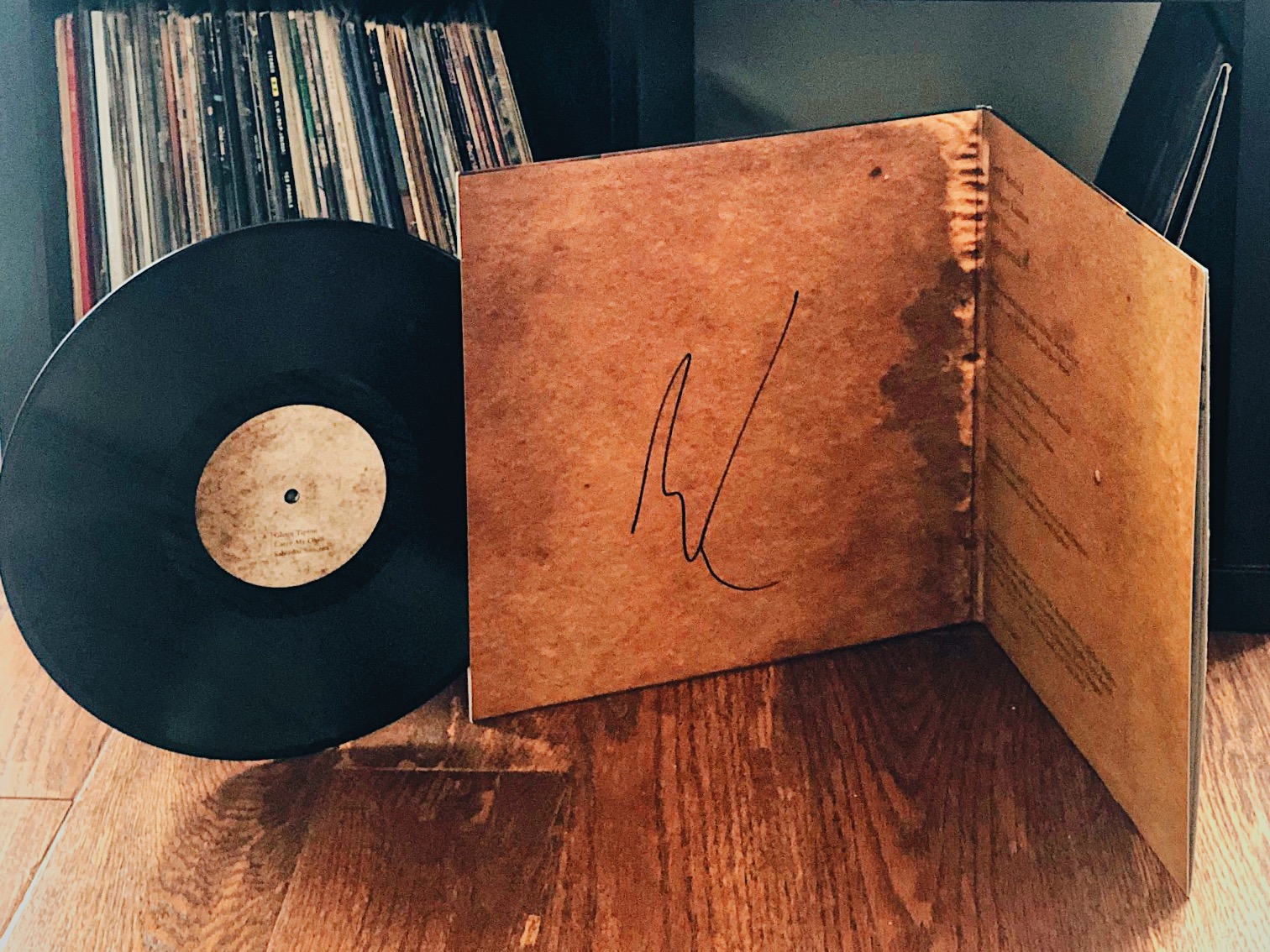 Tied for my favorite SKM album with April, and in my top three Kozelek-related projects ever, I was devastated that this record was long out-of-print by the time I started collecting records, and fetched prices in the $250–400 range, as did most of his early SKM output. Kozelek was stingy about represses, so I figured I'd never own it, or have to pony up the big bucks.

One day, I saw a copy on Amoeba's rare wall for $250, signed by Koz himself. Kozelek is notorious for not liking his vinyl fan(atics), so to get a signed one seems like a pretty rare get. I bit the bullet and bought it. Less than a few months later, against all odds, a repress was announced. To be totally faithful to the original, Obi strip and all, with the only change being the label name on the back of the jacket. I was pretty crushed… until I read that the repress had some sound issues that the original didn't. Cushioned the blow a bit. Still glad to own it, especially with that signature.

What are some cool experiences you've had because of your immersion in the vinyl community?

The coolest opportunities have come from collaborations through my channel. I had the opportunity to crate dig with Dave Elkins, the lead singer of one of my favorite bands, Mae. I got to work with Disney Music Emporium to talk about their awesome line of animated movie picture disks. I made videos for Romanus and Fonoflo, two companies that are pushing boundaries with sand/liquid-filled and LED records. Oh, and of course, meeting the great Richard Houghten, who is quite literally the Willy Wonka of vinyl. Proud to call him a good friend now.

I also started a record label of sorts, partnering with Qrates. TMR-1 was Fort Vine's Stay Magical, and it got funded quite easily thanks to my awesome fanbase. The record turned out wonderfully, both sonically and visually. TMR-2 got funded as well and is being pressed as we speak. Lots of good stuff in the pipeline there.

The coolest, without a doubt, was putting on TMR Fest. The overwhelming success and turnout after months and months of hard work was beyond rewarding.

Where are some of your favorite places to dig in your city?

Well, this is a tricky question. I just moved back to NYC after being on the West Coast for seven years. I'll share my spots on both coasts:

NYC: Academy, Record Grouch, A1, Limited To One, Human Head.

What's the most expensive record in your collection?

That depends on if we consider a box-set a record or not. To be safe, let's cover both.

Box Set: William Basinski's The Disintegration Loops. An iconic piece of history, absolutely masterful and heartbreaking minimal ambiance. Usually falls between $450–600 when sold. I had my copy signed by him at an in-store appearance at Mount Analog in LA, which was so cool.

Record: Kanye West's Late Orchestration. No one really knows the origin of this. Some people say that it was given to some DJs, or out as promos back in the Late Registration era. Some are adamant it's a bootleg. Either way, if it was a bootleg, you think it would have seen a repress by now. Comes in a generic Roc-A-Fella jacket with a Late Orchestration sticker—it's two discs of Kanye rapping his heart out, even to the point of getting out-of-breath, with a full orchestra behind him. Cheapest copy on Discogs as of me typing this is $525. 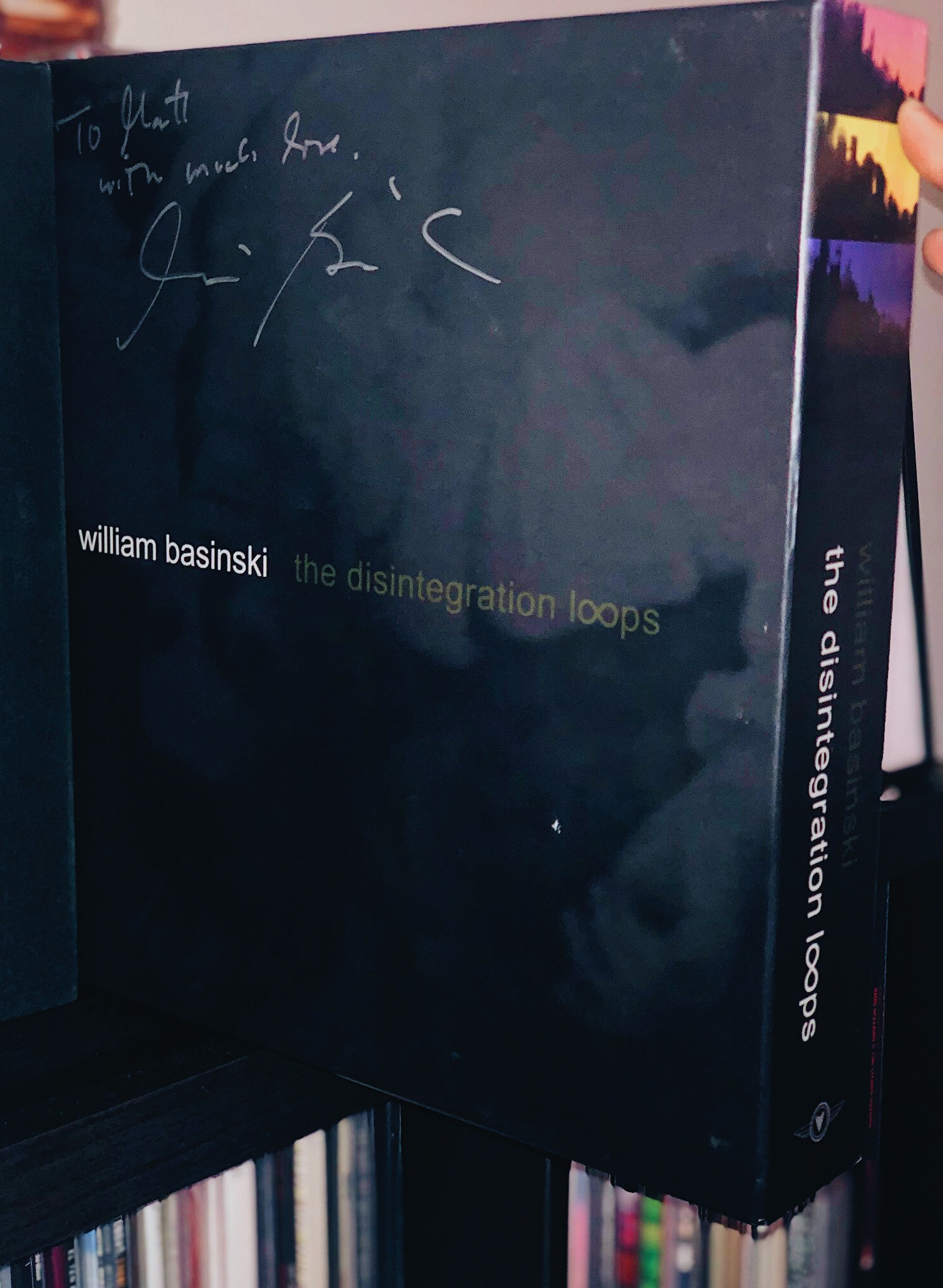 Matt's copy of The Disintegration Loops

Final question: What do you think your record collection says about you?

I think it says to your average person that I'm a hoarder, LOL. But honestly, it shows that I appreciate a wide variety of music with equal fervency. From doo-wop to ambient to indie folk to hip-hop, most genres are represented within the confines of the shelves, and it continues to shrink and expand, almost like a beating heart, as my tastes change and new music releases. I think ultimately the biggest takeaway is not what it says about me, but what it says about the state of the music industry, past and present. There's a lot of great music out there, and it's up to us to discover it and share it. I'm just doing my part.