In 1968, multi-instrumentalist and soon-to-be producer Al Kooper was at a crossroads. After a decade in the music business, which included playing guitar with The Royal Teens at 14 (they had a #3 hit, "Short Shorts," in 1958, although Kooper isn’t on the recording), penning Top 40 hits like "This Diamond Ring" for Gary Lewis & the Playboys, finagling his way onto Bob Dylan’s timeless classic "Like A Rolling Stone"—not to mention being in Dylan’s band during his infamous 1965 Newport Folk Festival performance—joining The Blues Project, founding Blood, Sweat & Tears, and countless other projects, Kooper was transitioning into a new role as industry insider and producer at Columbia Records.

He was also looking for something to do. 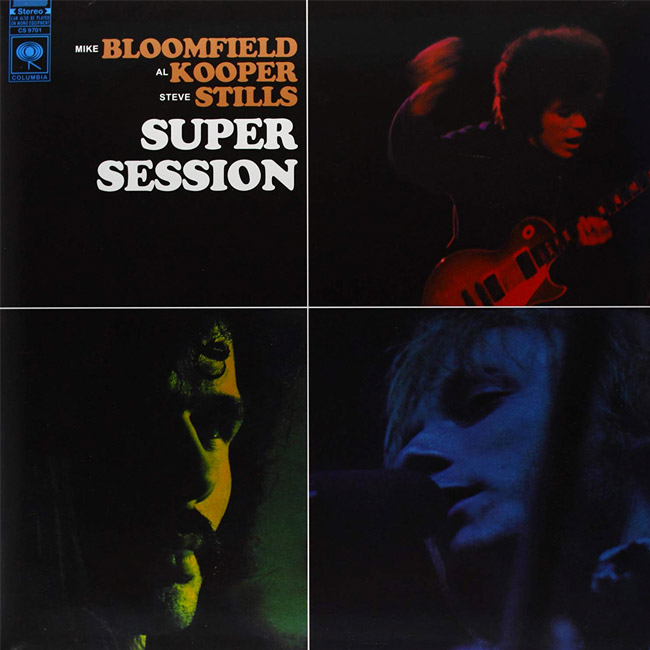 He recruited guitarist Mike Bloomfield, his friend since Dylan’s 1965 Highway 61 Revisited sessions, and convinced him to play on a new project he was working on.

"Our careers were extremely parallel," Kooper told JamBands in 2003. "We were both in a blues band. We both quit the blues bands to start our own horn bands [Kooper’s Blood, Sweat and Tears and Bloomfield’s The Electric Flag]. We both got kicked out of the horn bands that we started … I asked him if he just wanted to go in and jam because I didn’t have anything to produce. I said it would be fun and it would be like the jazz records."

Kooper’s vision was to record a rock album, but in the spirit of the great jazz albums of the ‘50s and early ‘60s. He wanted to get a few musicians together in the studio, jam, and record the whole thing. He pitched the idea to Columbia Records and—despite the proposal’s unorthodox nature—they went for it.

Although, it wasn’t like Kooper’s idea was that novel or outrageous. Moby Grape, the psychedelic, genre-blending, jam-friendly band from San Francisco, did something similar with their release, Wow/Grape Jam, recorded earlier that year.

"Moby Grape had the first rock jam album, also on Columbia, recorded in January/February 1968," Harvey Brooks, the bassist on Super Session, recalls. (Brooks’ CV also includes sessions with Dylan, the Doors, Miles Davis, and many others—he was also the bassist in the Electric Flag). "Kooper and Bloomfield did guest spots on that album, and I think Kooper was inspired by the Moby Grape project to take it one step further, without all the extra production, and breaking it down to its simplest form. Super Session was recorded in May 1968."

Kooper booked two days at the Columbia Recording Studio in Hollywood, hired a band—which, in addition to Brooks, included Barry Goldberg on electric piano and drummer Eddie Hoh—went over a few song ideas with Bloomfield, and pressed "record." "Al Kooper picked the tunes," Brooks says. "I was vaguely familiar with the tunes, some more than others. We had a total of no rehearsals. Kooper and Bloomfield went over tunes in a pre-production phase, which I was not part of."

On the first day, they recorded the tracks that became side one. Kooper wanted to showcase Bloomfield’s soloing—he thought Bloomfield’s studio output paled compared to how he sounded live—and he wanted to capture some of that magic.

"I was trying to capture him the way that I knew him to be, because I was very dissatisfied with his other recordings," Kooper said in a 1995 interview with BluesPower. "I felt like my mission, the best thing I could do as a producer, would be to get all this great playing out of him that I knew he had but no one had been able to document on tape."

To do that, he had to choose music that gave Bloomfield the space to let loose, and for that, nothing was better than a 12-bar blues. The songs that open and close the first side—"Albert’s Shuffle" and "Really"—are just that: chorus after chorus of ripping, inspired, 12-bar blues. Both songs are instrumentals and, with the exception of an organ break or two, are nothing but extended guitar solos.

"I was trying to capture him the way that I knew him to be. I felt like my mission, the best thing I could do as a producer, would be to get all this great playing out of him that I knew he had but no one had been able to document on tape."
Al Kooper

Bloomfield’s tone is classic Bloomfield: biting, nasal, and played on a Les Paul plugged straight into a Fender Super Reverb with the bass rolled off. The amp is cranked—you can hear the feedback get out of control at points during "Albert’s Shuffle" and "His Holy Modal Majesty"—and his tone has just a touch of hair. The setting plays to his strengths and shows off his phrasing, rhythmic sophistication, and unconventional harmonic sense.

In other words, mission accomplished.

Kooper plays organ and sings on the album, although he also plays an Ondioline—a French-made keyboard and precursor to the modern synth—for the fanfare and flourishes of "His Holy Modal Majesty." Brooks played a Fender Jazz Bass through a Fender Dual Showman. His amp was mic’d, but he also went direct, and the bass was recorded to two separate tracks. "I played only with my fingers on this album," he says. "I generally don’t use a pick unless there are passages that require more speed or definition than my fingers can handle."

The only problem was that Bloomfield didn’t show up for the second day. As Kooper writes in his memoir, Backstage Passes & Backstabbing Bastards, Bloomfield left him a note saying, "Dear Alan, Couldn’t sleep ... went home ... Sorry." And that was that.

Kooper called every guitarist he knew in California. Stephen Stills was the guitarist who returned his call and, similar to Kooper and Bloomfield, he was also between gigs. He had just left Buffalo Springfield and was a few weeks away from joining Crosby, Stills & Nash.

"As a producer, Kooper was responsible to maintain his concept," Brooks says. "Al was on the phone all day to pull the session together, coming up with Steve Stills to replace Bloomfield. I showed up at the session and Bloomfield had become Steve Stills. I said, ‘OK,’ and got right into the next tune."

The songs on side two are taken from that second day’s session. It’s less jamming and more song-oriented—three of the four tunes have vocals—though it includes an 11-plus minute cover of Donovan’s "Season of the Witch," which for many is the album’s standout track. (And that’s despite the abrupt tempo changes at the spots where Kooper spliced together the different takes.) It also includes, "You Don't Love Me," a Willie Cobbs’ cover that’s become something of a psychedelic standard—Quicksilver Messenger Service, the Grateful Dead, John Mayall & the Bluesbreakers, the Allman Brothers, and many others have covered it. It’s also an early example of the studio effect, flanging, which Kooper added later when mixing.

Kooper also added his vocals and horns when he mixed the album later in New York. But with a powerful singer like Stills on hand, why didn’t he use him?

"The only thing I regret—though it was a wise move—is I couldn’t let [Stills] sing," Kooper explained to SoundBard in 2015. "I hadn’t done any business on it first … he was signed to Atlantic, and this was a Columbia record, and I had no time to negotiate. I hired him for the session. And, you know, the lawyers worked it out."

The album closer is "Harvey’s Tune," a short Brooks composition. "We needed one more tune to finish the album," Brooks says. "I played it on guitar and Kooper liked it. He took [the tapes] to New York to do the overdubs, and his horn arrangement with Joey Scott made the tune come alive." A later version of the song appears on the Electric Flag album, An American Music Band, with lyrics as "My Woman That Hangs Around The House."

Super Session hit the streets on July 22, 1968 and—surprise—it sold. It peaked at #12 on the Billboard 200 and went gold. Fifty years later, it still holds up, though lacking context, it’s hard to understand what the fuss was about.

Super Session wasn’t the first of its kind—but for some 60-something boomers, it defined an era. In the late 1960s, rock musicians still had an intimate connection to the roots of their music. They were steeped in the blues at a time when the blues were still a vibrant, urban art form. They knew the great blues artists, studied with them, and sometimes even played in their bands. They incorporated the blues into their music, and—unlike the cliché it was to become—it sounded authentic.

It was also a time when rock musicians—not to mention A&R men and corporate suits—grew up listening to jazz. The concept of great playing and blowing wasn’t alien to the casual listener. Songwriting was important—songwriting was always important—but popular audiences still had a taste for improvisation. Someone like Al Kooper could pitch a jazz-style rock album to a major label. The label execs not only knew what he was talking about, but approved the idea and its accompanying budget. Audiences were ready—even hungry—for open-ended, improvised music and it sold, not just to a niche audience, but climbed the charts and made real money. 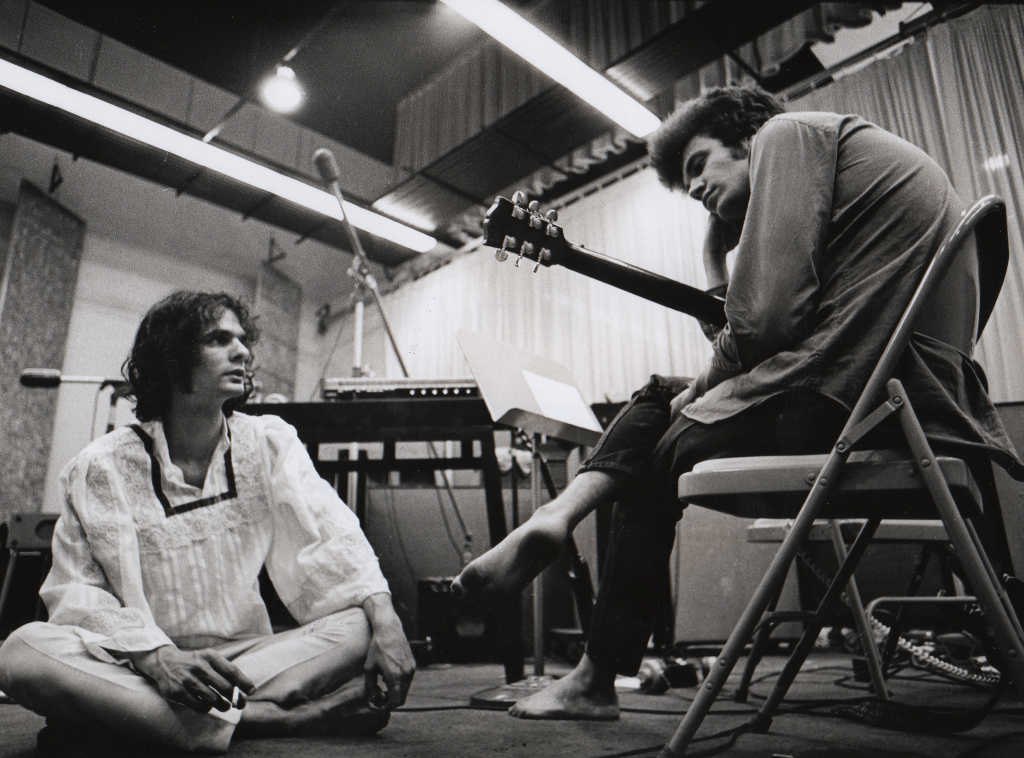 Al Kooper and Mike Bloomfield during the Super Session sessions in Los Angeles, 1968

Super Session, with its loosey-goosey, jam session vibe was a product of its time. It was indicative of an attitude that today is—for the most part—limited to the jam band scene. A-list acts like Cream, Led Zeppelin, the Allman Brothers, Mountain, Deep Purple, Jimi Hendrix, Johnny Winter, Neil Young, and countless others, saw their songs as a vehicle for improvisation and exploration. Their live sets went on and on. They didn’t play to click tracks. They weren’t married to a particular version of a song. Solos were improvised. Even bands like the Rolling Stones let loose and jammed on stage.

And similar to Super Session, that attitude was reflected in the studio as well. Whether it’s the live jams on Hendrix’s Electric Ladyland, or the ethos that informed bands like Canned Heat and Hot Tuna, blues-based improvisation was integral to the sound of the times.

Super Session was reissued in 2003 and included unreleased material as well as remixes of "Albert’s Shuffle" and "Season of the Witch," but without the horns. "I did that because there had been requests for that over the years," Kooper told JamBand. "I do listen to what people say to me."