Although often overshadowed in the public mind by their 1968 debut LP, Music From Big Pink, The Band's eponymous second album, a.k.a. The Brown Album, is arguably the definitive statement of their musical magnificence. It was released in September 1969, 50 years ago.

The members of The Band originally coalesced in the early '60s as backing musicians for the Canadian rockabilly singer Ronnie Hawkins, but they stepped on to the global stage in 1965 when Bob Dylan chose them to be his live backing group. Their years with Hawkins had made them veritable road warriors, and the exposure they received while touring with Dylan—who was then undergoing his controversial transition from acoustic folkie singer-songwriter to electric rocker—placed them slap-bang in the forefront of the mid-'60s rock avant-garde. 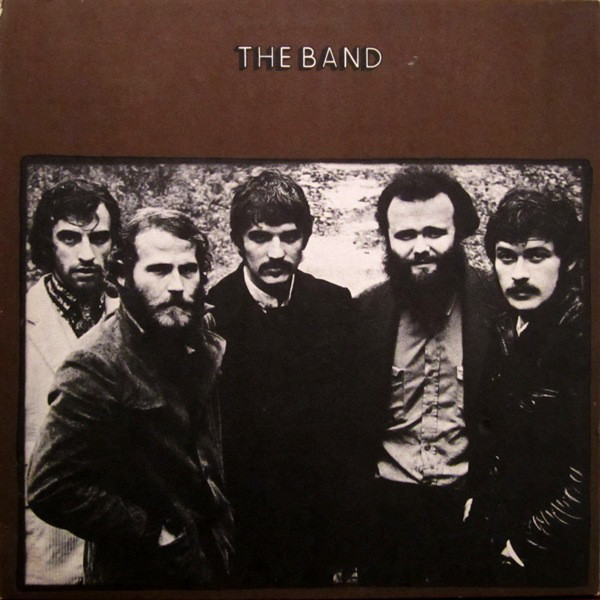 While Dylan was out of the public eye, recovering from the injuries he received in a 1966 motorcycle crash, he and The Hawks (as The Band were then known) came together at Dylan's Woodstock home to record demos, later released as The Basement Tapes. It was during these sessions that it became obvious these stalwart Canucks were much more than a bunch of competent session men. (During that time, drummer Levon Helm, the group's lone American Southerner, was absent.)

At least seven of the Basement Tape recordings featured composer contributions by members of The Hawks, notably lead guitarist and vocalist Robbie Robertson, pianist and lead singer Richard Manuel, and bassist and singer Rick Danko. Of these songs, "Tears Of Rage" and "This Wheel's On Fire" would show up in re-recorded versions on that debut Band LP, Music From Big Pink, since hailed as a cornerstone in the creation of what has come to be known as the Americana genre.

These songs shared the oblique, inscrutable lyrical style that Dylan had pioneered, but musically they were pared down, stripped of unnecessary decoration, and generally more earthy than Dylan's output had been up to that time. Few would deny that other Big Pink tracks such as Robertson's "The Weight" and "To Kingdom Come" and their hauntingly plaintive version of Dylan's "I Shall Be Released" stand among the finest achievements of late-'60s rock. Considered as a whole album, Big Pink set itself apart from the bombastic rise of prog-rock—with its focus on musical virtuosity and its medieval lyrical conceits—and it stood equally distant from the blues-inspired machismo of Cream, Ten Years After, and their ilk.

"We were rebelling against the rebellion," Robertson reflected some years later. "Whatever was happening. If everybody was going east, then we were going west, and we never once discussed it. There was this kind of ingrained thing from us all along. We were these kind of rebels with an absolute cause. It was an instinct to separate ourselves from the pack."

Their debut was released on July 1, 1968, and the critics were sympathetic to it. Several acknowledged it as a breakthrough—but, like many breakthroughs before and since, Music From Big Pink didn't sell well, rising no higher than No. 30 in Billboard's albums chart. More significantly, however, Eric Clapton subsequently revealed that it was Big Pink's gutsy, visceral style that inspired him to quit Cream and form Blind Faith, while George Harrison and Pink Floyd's Roger Waters both acknowledged it as a major influence.

No doubt buoyed up by the praise they were attracting, the quintet moved into a house in the Hollywood Hills in mid-1969, aiming to re-create the club-house vibe that had served The Basement Tapes so well.

The multi-talented producer John Simon, who had produced Big Pink, reunited with them for The Band. Speaking of how the group functioned, Simon told Sound On Sound magazine: "They had very few ego problems. None of The Band's members cared who played what instrument. Whatever worked for the song was good. They'd been playing together for years and were consummate musicians."

Curiously, given the overwhelmingly Canadian origins of The Band, the album that bears their name was apparently conceived as a conceptual piece about the American South. Robertson, who wrote or co-wrote every track on the album, had been profoundly attracted to the region and its people ever since visiting it some while earlier. "I liked the way people talked, I liked the way they moved," he explained in a 1988 radio interview. "I liked being in a place that had rhythm in the air. I thought: No wonder they invented rock 'n' roll here—everything sounds like music."

In keeping with its loose concept, he opened the album with "Across The Great Divide," in which a troubled Southern husband and wife discuss the possibility of moving West to seek a better life, and ended it with "King Harvest (Has Surely Come)," a heartbreaking plea from an impoverished farmer seeking deliverance from financial ruin.

But the song that most exhibits the album's inherent Southern-ness is probably "The Night They Drove Old Dixie Down," which Robertson claimed was many months in the making. "It took me about eight months in all to write that song. I only had the music for it, and I didn't know what it was about at all," he revealed in Barney Hoskyns's book Across The Great Divide. "I'd sit down at the piano and play these chords over and over again. And then one day the rest of it came to me."

The album unfolds as a sequence of vividly drawn rustic narratives, more a series of strikingly emotive cameos than a continuous narrative, but no less powerfully moving for that.

Released on September 22, 1969, The Band surpassed Big Pink not only musically and compositionally, but also commercially, going Top Ten in 1970, eventually securing platinum status, and establishing the group as a force to be reckoned with throughout the '70s.

Its enduring impact can be assessed from the fact that in 2009 it was included in America's National Recording Registry on the grounds that it is "culturally, historically, or aesthetically important." In between, it notched up an impressive tally of accolades, including its choice by Rolling Stone as No. 45 in its 100 Greatest Albums of All Time, by Q magazine as the 76th Greatest Album of All Time, and by Time as one of the 100 Best Albums Ever.

Coming off the back of The Band, their third album, Stage Fright (1970), achieved their highest-ever chart position, peaking at No. 5 in Billboard, and it included some undeniably classic Band artifacts, notably "The Shape I'm In" and the title track, both of which became staples of the group's live shows until their final gig in 1976. The whimsical "W.S. Walcott Medicine Show" features some superb sax from Garth Hudson and shines a light on Levon Helm's childhood memories of traveling minstrel shows. The waltz-time "Sleeping" provides a melancholic showcase for Richard Manuel's vocals and is enhanced by one of Robertson's most sensitively conceived guitar solos.

Despite such high points, Stage Fright was fraught with tension during the recording process, and some contemporary critics delivered decidedly mixed reviews, noting that the historical sweep of the songs on The Band had been replaced by material that was more introspective and personal and that focused on disturbed states of mind. According to Robertson, the quintet was distracted by drugs, and Levon Helm spoke of "a dark mood that settled upon us."

Retrospective evaluations some years later delivered rather more favorable critiques. Q's resident Dylanologist John Bauldie re-assessed it, declaring that it "may well be the greatest of their records," while AllMusic's William Ruhlmann reasoned that "it was certainly different from their previous work… but it was hardly less compelling for that."

Cahoots in 1971 proved to be their last album of original material for four years. Despite a scintillating guest appearance by Van Morrison on the song "4% Pantomime," it received decidedly mixed reviews. Robertson has admitted to being uninspired during the Cahoots sessions, but again there were high spots that made it a rewarding listen for devotees. "Life Is a Carnival," punched along by Allen Toussaint's horn arrangement and Rick Danko's funky bass, is a delight, and their interpretation of Dylan's "When I Paint My Masterpiece" is another standout. Cahoots closes with the somewhat untypical "The River Hymn," Robertson's attempt to evoke a revivalist picnic by the riverside, establishing that The Band was still capable of successful stylistic experimentation.

The double live album Rock Of Ages (1972) was compiled from their winter 1971 residency at New York City's Academy Of Music. Obviously inspired by Toussaint's outstanding contribution to Cahoots, he was brought in to give the live recordings a little something extra, which he certainly did. The album is outstanding, arguably among the finest live albums ever released, presenting The Band in sparkling form, often surpassing the original studio versions in spirit and sheer joie de vivre. "It was the greatest experience of our life," Robertson raved. "We were overwhelmed by the feeling it gave."

In the studio, however, much of the spirit that had made their earlier releases so transcendent was gone by the time they released their all-covers album Moondog Matinee in 1973. The Band continued to release albums for a few more years, but, sensing that the end was nigh, they elected to go out on a high with a jubilant guest-star-studded final concert, billed as The Last Waltz, on November 25, 1976, at San Francisco's Winterland.

This celebratory Thanksgiving Day swan song included a full Thanksgiving dinner for all 5,000 attendees, plus guest appearances by Bob Dylan, Van Morrison, Neil Young, Joni Mitchell, Neil Diamond, Dr. John, Muddy Waters, Eric Clapton, Paul Butterfield, and their first employer, Ronnie Hawkins. The whole shebang was filmed by the illustrious director Martin Scorsese and released to cinemas as a documentary in 1978, as a result of which it inevitably overshadowed their previous live album. As a document of a live superstar jam, it's hard to beat, but debate still rages as to whether this or Rock Of Ages was their definitive live recording.

As an album, The Last Waltz first appeared as a lavish three-LP set in 1978 and included several songs not in the movie version. It also appeared in 2002 as a four-CD boxed set with 16 previously unreleased tracks, including rehearsal takes. However, regardless of format, the soundtrack recordings were "improved" by overdubbing and re-sequencing, making The Last Waltz a less accurate representation of The Band live than Rock Of Ages had been. Few would deny that it remains an iconic release and a vital historic document that no serious Band devotee would wish to be without.

Barely a handful of groups could stake a claim to having carved out a niche so unique that it spawned an entire genre, but that's exactly what The Band did—because Americana might never have existed without their pioneering early releases.