XTC had set themselves apart from the rank-and-file of Britain's '70s punk brigades through the sheer musical virtuosity they displayed on their first two albums. But they moved into the major leagues with their third, Drums And Wires, which hit British record shops on August 17, 1979. 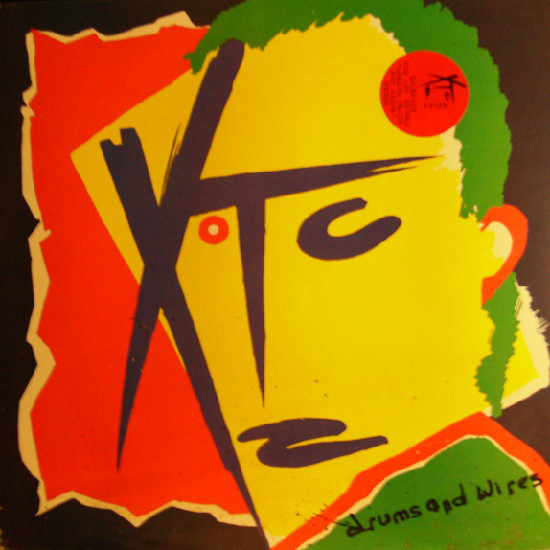 Their impressive 1978 debut album, White Music, had nudged into the lower regions of the UK's Top 40 albums chart, but the hectic, erratic momentum of what one critic dubbed its "agitated amphetamine rock" style only found favor with the more intellectually-inclined critics and rock fans. It required a solid year and a half before it even got released in America, by which time their second album, Go 2, was already doing next-to-no business in the UK.

In retrospect, these are both excellent albums. But, as is so often the case with highly principled, imaginative young artists, the band was pursuing its own idiosyncratic creative urgings, which were totally unaligned with any then-current popular music idioms. Blending new-wave energy with prog-rock sophistication, they were charting a course that seemed—deliberately—to exhibit zero potential for commercial exploitation.

Go 2, in particular, went out of its way to avoid anything that resembled logical marketing strategies. It was clad in a cover that, instead of a glossy color photograph of a cool young rock quartet, featured a densely packed, black-and-white text essay about how album covers are used to attract buyers. 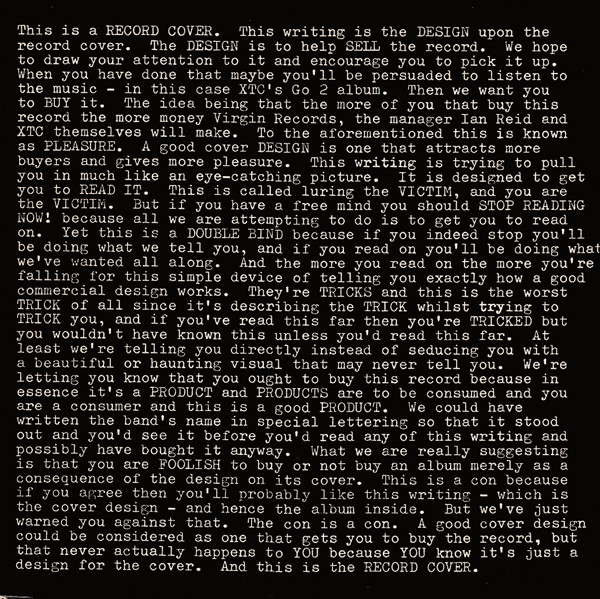 The handful of English-language students who got the irony loved it. But it sailed past the legions of teen girls who drooled over the moody shots of The Police, dyed blonde and deeply soulful, on their debut album. Equally, the lads who salivated over Eddie's finger-tapping solos on Van Halen's debut album had little interest in record sleeves that lectured them about sales techniques.

Arguably, XTC were playing the long game, hoping to attract that tiny core of ultra-hip influencers who would, eventually, make the band seem cool to the mainstream. If so, the tactic was showing little sign of working until the single "Making Plans For Nigel," extracted from Drums And Wires, which unexpectedly lurched toward the UK singles charts in September 1979.

Earlier that year, XTC's founding keyboardist, Barry Andrews, had quit the band. He was an imaginative and capable player, and his departure had caused some concern that their forward momentum might be disrupted. Instead, however, it seemed to serve to focus the others more intently on what they were doing. The band's main songwriter and guitarist, Andy Partridge, continued to produce wonderfully eccentric pop-rock, while bassist Colin Moulding upped his game, contributing four tracks, all of which showcased his increasing maturity as a composer.

The departure of Andrews had another beneficial impact on XTC, because instead of replacing him with another keyboardist, they brought in a second guitarist, Dave Gregory. A self-confessed prog-rock nut, Gregory was nevertheless a perfect fit for the band, delivering exquisite lead guitar lines that sat beautifully alongside Partridge's more dissonant anarchic rhythm attack, adding a warmth that had not been there before. Hitherto, XTC had tended toward the angular, but Drums And Wires moved them a shade or two closer to the kind of melodic pop that Partridge had enjoyed as a teenager.

The record was recorded at Virgin's recently opened Townhouse studio in west London with producer Steve Lillywhite and engineer Hugh Padgham. Gregory recalled that rather than drugs, it was "fueled by [the Scottish beer] McEwan's Export."

The original UK release of the album opens with the biting social commentary of Moulding's "Making Plans for Nigel," a response to the right-wing politics of the British Prime Minister, Margaret Thatcher. It was also a catchy song with sweet vocal harmonies, a fact recognized by BBC Radio, which playlisted it. Within days, this secured XTC enough chart action to score them a couple of appearances on Britain's all-powerful TV show, Top Of The Pops.

XTC - "Making Plans for Nigel," Top of the Pops

Partridge's "Helicopter," which follows, is notionally a boy–girl relationship song, but it's much more in the overwound and anxious vein that XTC fans were already familiar with. Another Moulding composition, "Day In Day Out," lacks the pop immediacy of "Nigel," but its speedy guitars make it a compelling listen, after which Partridge's jaunty, reggae-driven "When You're Near Me I Have Difficulty" provides a perfect stylistic bridge into Moulding's "Ten Feet Tall." With its languid, jangly guitars and shamelessly poppy lyric, this is probably the album's most accessible track, but Partridge refuses to let the mood last, delivering his inscrutable "Roads Girdle the Globe," which somehow manages to flow and twitch at the same time.

The paranoid "Real by Reel," which opens side two, is Partridge's quirky take on the conspiracy theories that seemed outrageous in 1979, but in today's world are an undeniable fact—where every phone, TV set, and iPad is constantly feeding your personal data to unseen global conglomerates. Before you can recover from this, he serves up "Millions," employing his finest David Byrne-like vocals, pleading with the Far Eastern nations to not let themselves be poisoned by Western thinking.

"That Is the Way," Moulding's final track on the album, returns to the social protest mode of "Nigel," this time lambasting the tyranny of British good manners rather than the enforced drudgery of working life. Musically, though, it also provides a couple of more soothing moments, before Partridge weighs in again with the nightmarish "Scissor Man" detailing the punishments doled out by a nocturnal vigilante who makes Freddy Krueger look like The Lone Ranger. Astonishingly, Partridge tops that horrorshow with the closing track, "Complicated Game," whose nervously ticking rhythms underscore a lyric that is as terrifying as it is impenetrable.

Uncomfortable and disturbing though much of Drums And Wires is, it's virtually impossible not to want to hear it again as soon as it ends. Like it or not, it worms its way into your subconscious and stays there. The eminent Village Voice critic Robert Christgau reckoned it was "moving toward a great art-pop mean that will set standards for the genre. Catchy, funny, interesting—and it rocks."

The high profile of "Making Plans for Nigel" helped the album to reach No. 34 in the UK albums chart. More significantly, the reputation of Drums And Wires has grown over the years. Wilson & Alroy praised its "first-rate tunes" in 1997; it was rated a "Classic of Its Genre" by Uncut in 2003; and it ascended to No. 38 on Pitchfork's Top Albums Of The '70s list in 2004. Then, on its reissue in 2014, Audiophile Review hailed the album as a "New Wave Pop Prog Masterstroke."

Having attained some welcome international attention with Drums And Wires, XTC consolidated their appeal with Black Sea in September 1980. Gregory's integration into the band seemed to be paying dividends because, although he didn't write songs as such, his skill at crafting arrangements helped to make this a much cleaner sounding record. Among its four Top 40 hit singles, Moulding's "Generals And Majors" was one of their most instantly appealing hooky songs, while Partridge's whimsical "Sgt. Rock (Is Going to Help Me)" ascended to No. 16, giving them their biggest chart hit to that date.

Its cover had a depiction of a prehistoric carving of a white horse on an English chalk hillside, perfectly capturing the spirit of the album and derived from Partridge's deep roots in the rural landscape of his home county, Wiltshire. Much attention had been focussed on Moulding after his success with "Making Plans for Nigel," but Partridge now hit a peak in terms of composing songs that, while still complex, sounded deceptively simple. "Senses Working Overtime" is, in effect, a jangly singalong and earned its just reward when it took the band to No. 10 in the UK singles chart, their highest position ever. The album itself reached No. 5, also their highest position.

This, however, marked the end of an era for XTC. Forced into what seemed an interminable round of live touring, Partridge became increasingly unhappy about going on stage and was plagued with crippling stage fright. During the English Settlement tour, he collapsed on stage in Paris and then suffered a breakdown after their show in San Diego in early April 1982.

He never returned to live performing, and the band became a studio entity from that day until their eventual messy dissolution. Critics and devoted fans continued to adore them, but by somewhere around 2014 they existed only as a legal entity, and no new material by the quartet that had fashioned their classics was in prospect. Nothing, however, can detract from the frankly astounding and utterly unique body of work they created in the '70s and '80s.